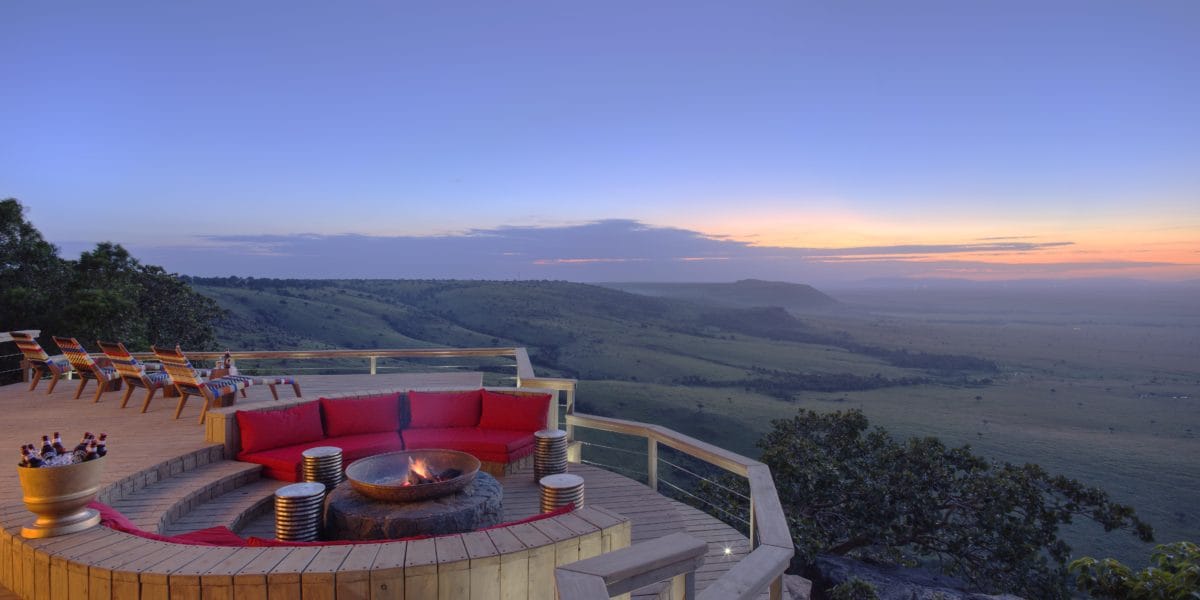 A luxury safari camp providing a true Out of Africa experience

Safari Lodge Review: Angama Mara. I recently had the privilege to return to the Maasai Mara, one of the most beautiful and popular national parks in Kenya where the stunning grassy plains seem to go on endlessly and the abundant and varied wildlife seems to appear at every turn of your head. The last time I was in the Mara, I stayed at Mara Plains (a truly amazing safari camp from the Great Plains Conservation portfolio), located on the 30,000 acre Olare Orok conservancy on the Northern part of the Mara.

The Maasai Mara is where one goes to experience the annual migration (the largest migration of animals on the planet) of over 2 million wildebeest and zebra from Serengeti National Park in Tanzania to Kenya’s Maasai Mara and back. I tried twice, unsuccessfully, to time our safari during this great spectacle but you just can’t predict mother nature. I did get to see many herds though – just not the frantic river crossings one sees on National Geographic. This time, I was excited to spend two nights at Angama Mara, a new luxury safari lodge that opened in summer 2015 under the experienced hands of Steve and Nicky Fitzgerald (both are formerly of andbeyond, Steve having served as CEO there for 15 years until his departure in 2009). Appearing on almost every new hot list since it opened, Angama has received heaps of praise for bringing a refreshing new approach to the luxury safari experience. Angama translates ‘hanging in the air’ in Swahili, aptly named as it is literally perched on an escarpment 6,233 feet above sea level overlooking the Great Rift Valley and the Mara Triangle. Covering over 300 square miles, The Mara Triangle (managed by the Mara Conservancy) makes up one third of the Masai Mara National Reserve, with the Mara River separating it from the rest of the reserve to the East and the Tanzania/Serengeti border just to its south.

What I love about this particular area is that it has the lowest density of visitors of anywhere else in the Mara yet possesses tremendous numbers of game grazing on the plains. As only a few lodges are located here, you don’t have to jockey for position with other vehicles during your game drive (we only saw a few others during our entire stay – sometimes none) to see the wildlife.  I viewed herds of buffalo, zebra, giraffes and elephants along with a few lions on just one game drive. And the variety of birds, like the one pictured below who looks like an undertaker, was impressive.  If you want to enjoy the Mara to yourself, this is the spot to do it.

Angama Mara is one of those places when you first arrive and see the expanse before you from the main deck, it literally takes your breath away. The scenery feels straight out of a scene from the Meryl Streep/Robert Redford film Out of Africa — which is not surprising as many scenes from the film were filmed right in this particular area including not far from where I stood on the deck of the Angama Mara. In fact, the backdrop in the movie poster (the picnic scene in the movie) is on the site of the Angama Mara lodge. Hopeless romantics may request a picnic in the very same spot. Watching the film again after so many years on my return flight home, it was exciting to see on screen a few of the spots I had passed by just the previous day. Fortunately not has much changed in the landscape since the shooting of the film.

Out of Africa movie poster

Plaque onsite of the Angama Mara

Angama Mara is essentially split into two camps – a North and South Lodge.  Each have their own reception, pavilion with fitness center and pool and 15 spacious 750-square foot tented suites. We were located on the South Lodge. Each tented suite provides a king-size bed, a sitting area, separate enclosed entry way, and a bath area with twin vanities, a claw-foot tub and large shower. Perched on the edge of the escarpment, each tent offers uninterrupted views of the plains, maximized by floor-to-ceiling glass panels and a massive deck that spans the length of the tent.

As I checked into my tent, I was greeted at the entrance by this cute furry fellow, a hyrax who took residence under my tent. Tents are designed in a contemporary style as one open room to keep the feel light and airy – even the claw foot bath is separated by a simple but stylish folding screen. I loved using the sliding screen doors out to the deck to enjoy the sounds and chill in the air at night (it can get quite warm during the day).  The heated mattress pad on the bed provided an Ahhh moment the second I slipped under the covers. From a design standpoint, Angama Mara is not your typical colonial style/Hemingway luxury safari experience you might experience at nearby Mara Plains, Andbeyond Bateleur or Singita Sabora tented camp in Grumeti. The style here is more modern/eclectic with distinctive splashes of Masai red throughout the camp. Everything is meant to be simplistic and uncluttered, with lots of glass panels (the main living/dining area panels open up to create one outdoor/indoor living room) to take in the incredible views. And, after all, that is the main draw here at Angama Mara. Meals are mainly served inside, on the deck  or in the private dining room but breakfasts are also offered on morning game drives and you can opt for a family-style bush barbecue in the forest, complete with lanterns. The cuisine at Angama is noteworthy – everything is freshly made, delicious with many options to please anyone. The chefs deserve much praise … as does the warm and friendly staff in general.

Our timing at Angama Mara was ideal as we had the full moon both nights during our stay. It’s a sight not easily forgotten and brings a unique serenity to an otherwise turbulent world these days. Although I missed them, spectacular morning sunrises come full frontal here and should not be missed.  However, I did wake up early enough to watch the hot air balloons get inflated on the valley below and lift off. IN BETWEEN GAME DRIVES

In between game drives, guests can use the fitness center or pool, both located in the pavilion with dead on views of the Mara below. Massages are also available on your tent deck. In the same pavilion, a gift shop offers some wonderful curated items with an adjoining beading studio where you can watch local Maasai women make intricate beaded jewelry. Back at the main public lounging area, there is a tucked away library/private dining room (which also serves well as a conference room) where guests can borrow a book and read up on Denys Finch Hatton or Beryl Markham at their pleasure.

Images courtesy of Angama Mara while others are our own personal photos.

Contact Jackie Magid at Inviato Travel at [email protected] or (917) 886- 1115 for rates and availability at Angama Mara and Angama Tented Camp.

A private look at the One &Only Cape Town

Gorilla Trekking in Rwanda: A Birthday in Volcanoes National Park

Return to Giraffe Manor in Kenya