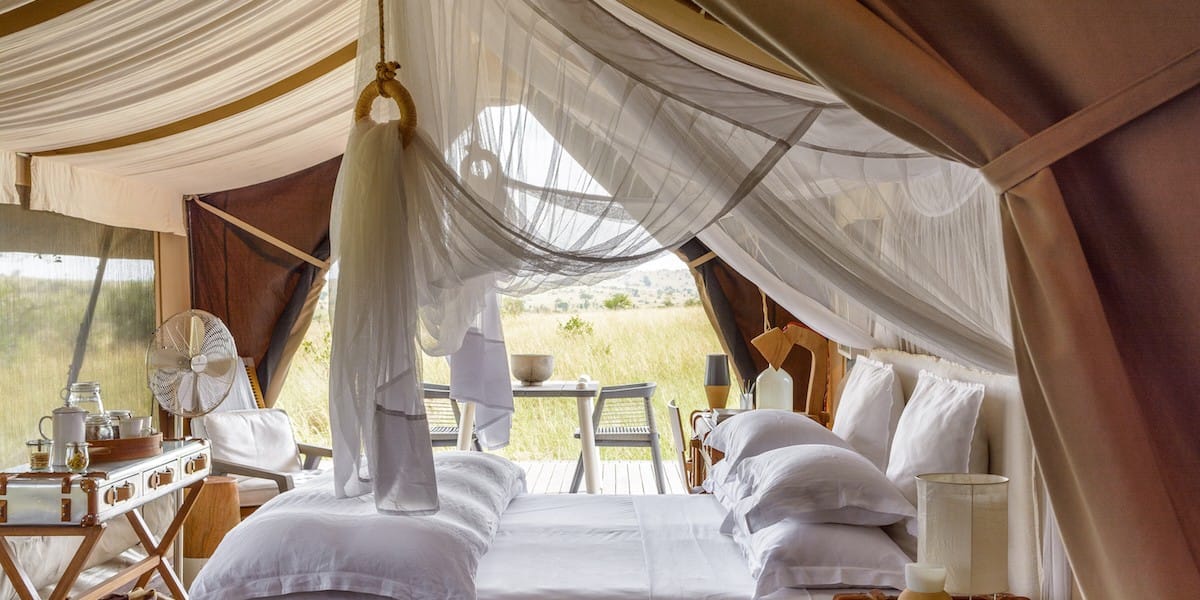 Singita’s Mara River Tented Camp was our next destination after our stay at Singita Sabora Tented Camp in Grumeti. The Mara River Camp opened in 2013 in the Lamai Triangle (an area of 98,000 acres where Serengeti National Park, the Kenyan border and Mara River connect) and is one of the newer additions to Singita’s portfolio of luxury lodges.

Situated along the northern banks of the Mara River, as its name suggests, the camp (one of the only lodges located within the park) is known for its excellent game viewing – especially during the Great Annual Migration. Which is, of course, why we chose it. 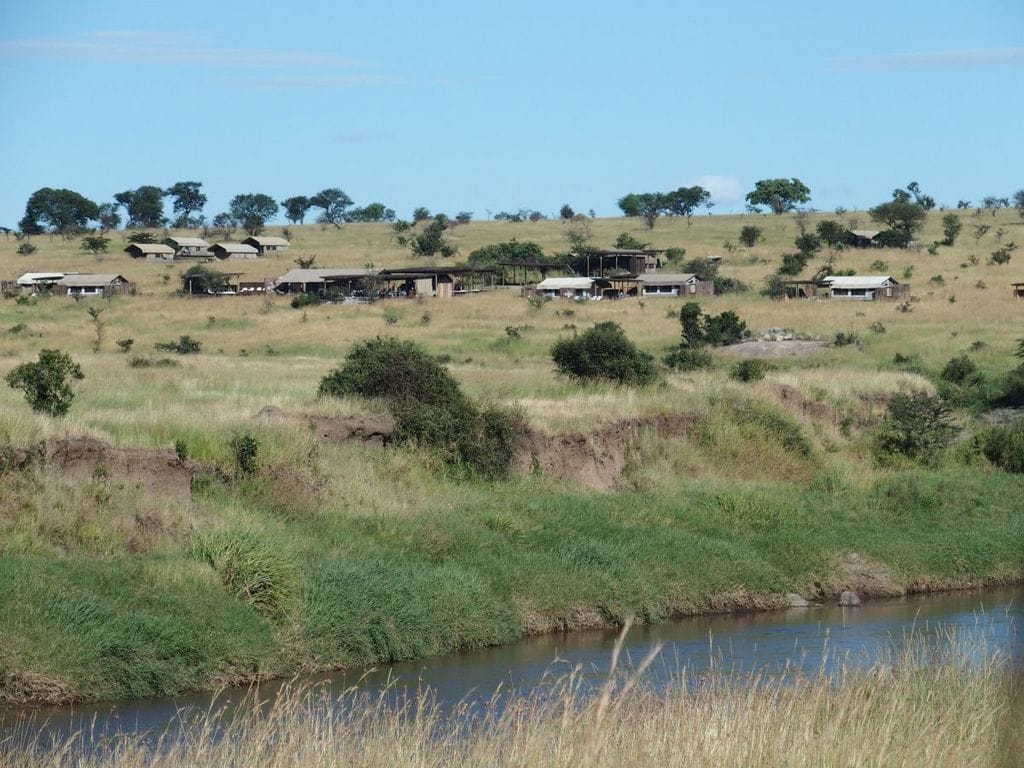 I was particularly excited to check out this Singita lodge after having selected it for our Inviato 2013 Top Ten Hot List.  Disappointed not to have seen the mass migration in the Grumeti area of Tanzania, we hoped to catch at least some of the two million wildebeest a little bit more to the North in the Lamai area of Serengeti.

The reason we chose two different camps was to improve our chances of seeing the ever-moving migration of wildebeest and the location of Mara River camp would hopefully offer us front seats if timed right. Images of thousands of wildebeest crossing the Mara River in front of the lodge ran through my head.

But that was not to to be here either as the herds apparently had other plans. It felt akin to getting the best seats to Broadway play, Hamilton, several months ahead only to find out the performance you had the tickets for was cancelled (except this trip was a tad more expensive than a pair of tickets to Hamilton!). But that’s the risk you take.

It is a pretty tough feat (and perhaps a little unfair) to be completely objective reviewing Singita Mara River Camp after our near-perfect experience at Sabora Tented Camp as I’m tempted to compare the two. I’ll try my best.

One of the first things to know about the Singita Mara River Tented Camp is it is remote. While the other safari lodges in the Serengeti, most closer to the Kenya border, are serviced by a large common air strip, 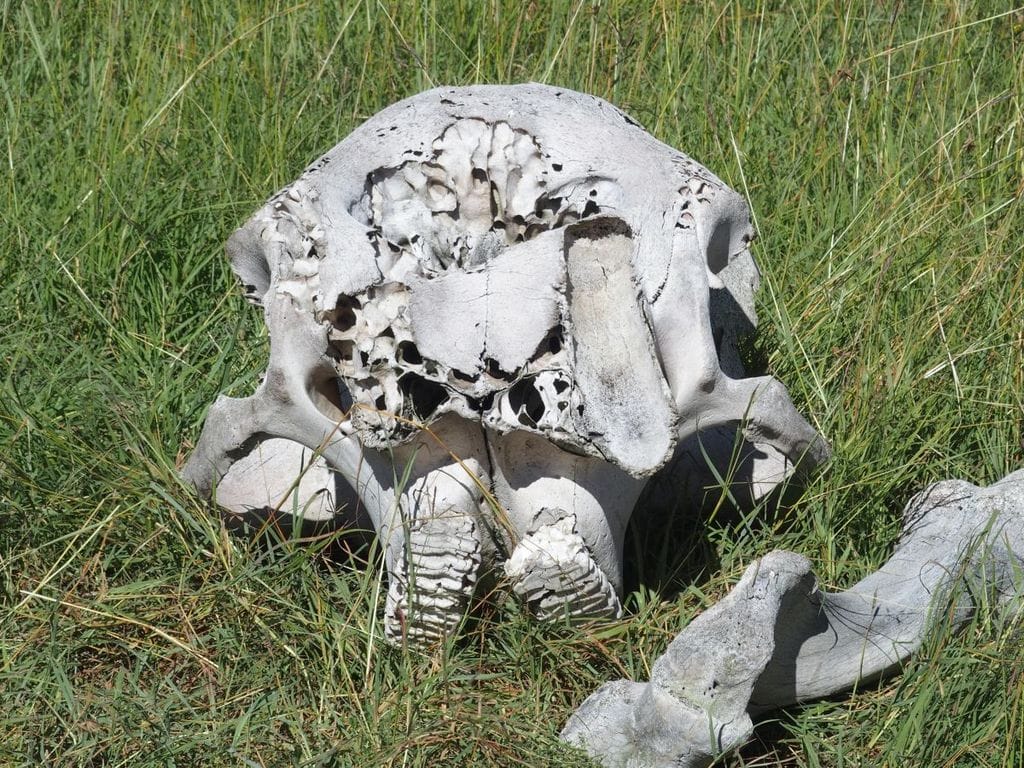 Singita has its own. This strip is a long hour and half drive from the camp.S

While in essence you are getting a mini-safari on the way to the lodge, we were unlucky the day of our arrival – we did not have a single sighting. Except we did see this eerie remains of the skull of an elephant.

The other ‘need to know’ about the camp is it is completely off the grid:  the semi-permanent camp is run entirely on solar power. Lighting is all LED and water is retrieved through a nearby borehole over 1130 meters down in the ground.  We loved the fact that this lodge was completely eco-friendly but be prepared that wifi can be intermittent and it can be a bit challenging to see at night.

The power went down briefly a few times during our stay but these things happen. After all, you are in the bush.

Singita Mara River is an intimate camp with six tents to accommodate just 16 guests (there are two tents ideal for families, connected by shared outdoor common deck). Everything here was on a much smaller scale than Sabora. There is one open multi-purpose living/dining and lounge area and an adjoining deck with a small plunge pool.

The guest tents themselves, while comfortable and attractively decorated, felt a bit cramped compared to the spacious tents at Sabora. Due to its remoteness, there are few options outside of the game drives but there is an on-site Spa therapist who can come to your tent for massages. 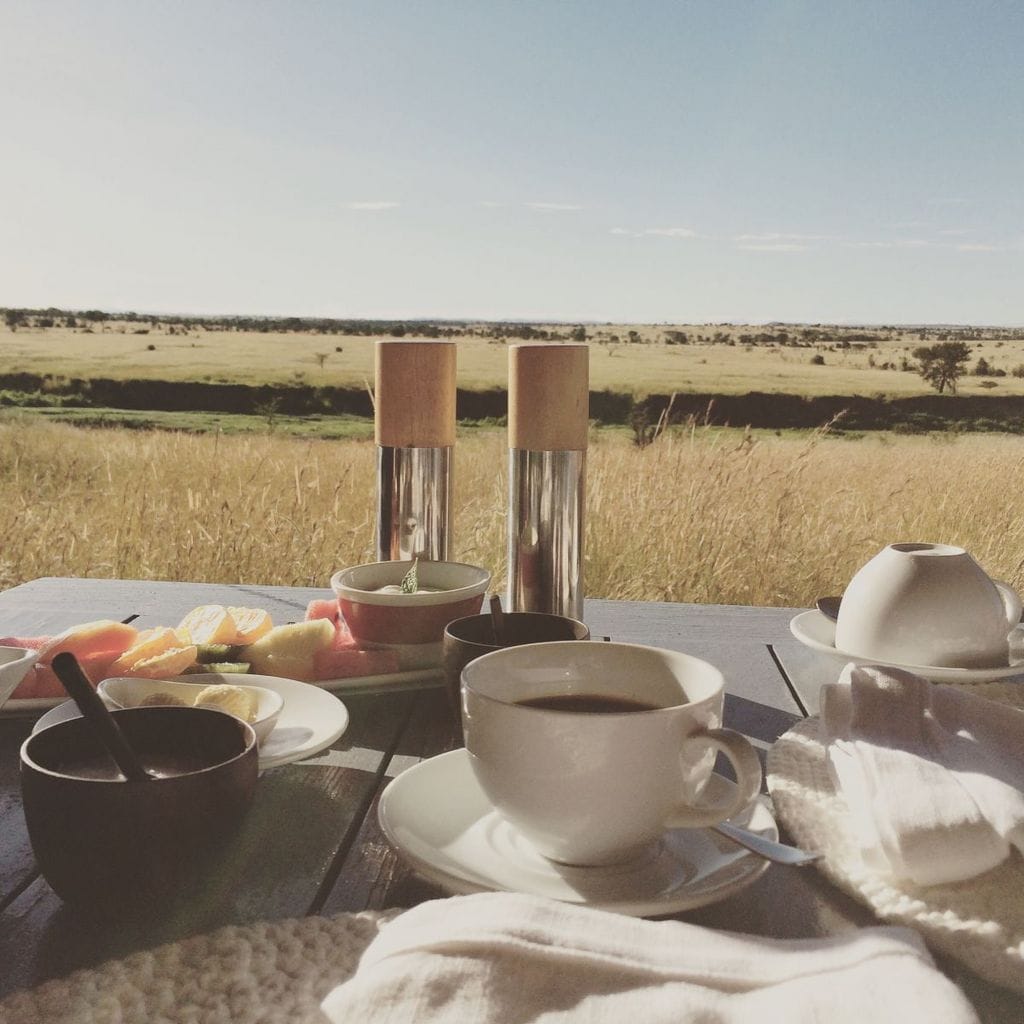 Laid-back Bohemian chic is the perhaps the best way to describe the Mara River Camp aesthetic: Everything is in tones of white, browns and blacks in canvas, metal and leather sprinkled with elegant local African art pieces (one or two that I particularly wanted to purchase but no one knew where they were sourced. Shame). The effect is very light, airy and quite attractive. And, a nice contrast to the 1920’s Hemingway-decor of our previous camp.

While the Singita Mara River camp was sold out when we originally booked it (actually we got the last tent available due to a cancellation), a few people cancelled at the last minute when they learned the migration would not be there. As such, only two other tents were occupied when we were there. As we like to mingle with guests, it was a bit quite for our tastes. The two nights there we were the only ones at dinner.

If I had one gripe during our stay, it was this area – dinner was really a non-event with a lack of seating options other than the deck and it was difficult to see what you are eating at night as lighting was scarce.

But the setting is the prime draw here and it is spectacular. The river provided a very serene backdrop and I can only imagine what it must look like. Over a month after we returned to New York, we saw these instagram pics below of the arrival of the migration at the camp. Damn those wildebeest, what took them so long?

Our two days at the Singita Mara River camp were spent on full-day drives (with a light lunch in the middle of the Serengeti plains) due to the distance we had to cover.

As you have all the Serengeti to explore, you can be driving for hours. The first day of our drive, we literally drove up to the Kenyan border – almost a 2 hour drive- to find segments of the migration.

One step over this little marker (to the left) delineating the two countries and you entered the Masai Mara. We saw plenty of wildlife, even more than at Grumeti, so we did not leave completely disappointed.

Madison, our driver and guide, was also excellent. We found it interesting both he and Robert, our guide, from Sabora, recently defected as guides from another excellent luxury safari company, andBeyond.  I particularly appreciated that Singita makes a point to rotate the guides between all its Tanzania camps.

Peter, the manager of Singita Mara River Tented Camp, was friendly and accommodating. Having just arrived from South Africa in his new position as manager a few days prior, he was just getting to know his way around the camp himself.

Compared with Singita’s Sabora Camp, where we always felt surrounded by a few staff members, here there were times we felt completely by ourselves. In that respect, it felt the least ‘Singita-like’ of the properties we have stayed at.

While there were a few areas we think could use improvement at the lodge, we did enjoy the serenity of the lodge and the beautiful setting. I’m sure nothing else would have mattered if the migration was right at our feet. No fault to the folks here. I would recommend Singita Mara River as a last stop of a more active itinerary – as a place to unwind and relax for 2-3 nights.

A private look at the One &Only Cape Town

Gorilla Trekking in Rwanda: A Birthday in Volcanoes National Park