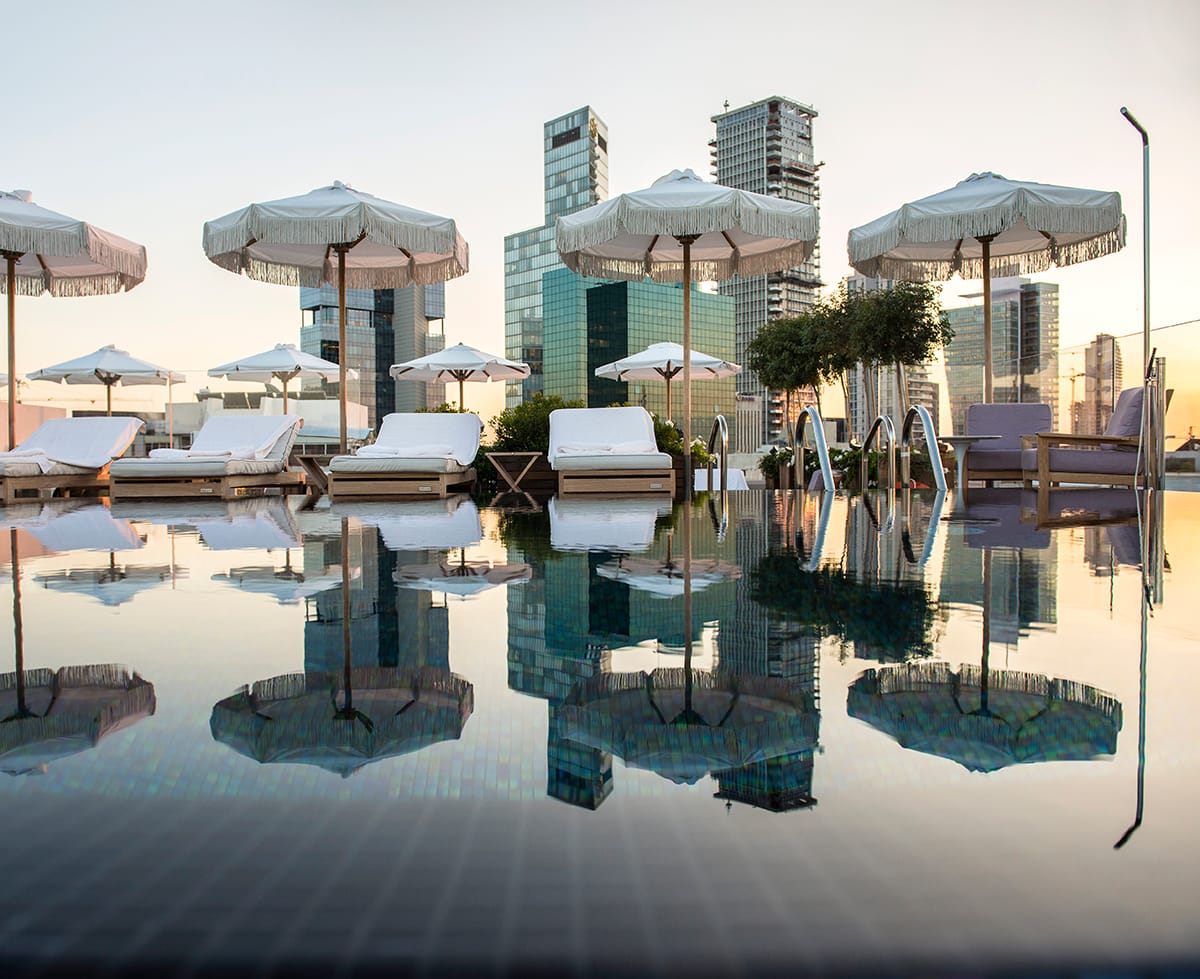 Inside Look: The Norman, Tel Aviv

It has been years, 27 in fact, since I descended upon Tel Aviv. Then, the reason was to attend my brother’s wedding in the ancient city of Caesarea, halfway between Haifa and Tel Aviv. During my too-short stop-over in Tel Aviv, I immediately fell in love with the vibrant spirit of the ‘White City’, its lively promenades, sublime weather, and especially its simple Mediterranean /Middle Eastern cuisine. With my own daughter soon to be a bat mitzvah in a few months, Israel has very much been on my mind lately and I’m yearning to return. This time with my own family in tow.

In Jerusalem, new hotel openings have been popping up in recent years – notably the Waldorf Astoria and Mamilla (see our review here) – bringing healthy competition to the King David, once the only luxury hotel in town. But up until a year ago, a stay in Tel Aviv presented limited interesting options to rest your head – your choice was mainly the grand dame Dan Tel Aviv or King David hotel.  Opened in October 2014, The Norman has brought a breath of fresh air to a city that has been typically a short stop in between touring Israel. Now, this chic boutique hotel is getting a lot of buzz from industry and guests alike. It has already been praised on Conde Nast Traveler’s 2015 Hot List: The Best New Hotels in the World and Travel & Leisure’s ‘Best New Hotels on the Planet‘. When two different discerning traveler friends recently returned from The Norman, both with similar rave reports about the service, modern essence and outstanding location, I knew it was time to take a closer look.

The Norman. A name that immediately brings to my mind a South Beach Miami hotel or an old jewish uncle (like Norman Fell, who played Mr. Roper on Three’s Company!).  At first glance, I found the choice of its name odd for this new hotel. But then I learned the name has significance: It was chosen in memory of Norman Lourie – a South African pioneer, filmmaker and founder of of Israel’s first luxury resort hotel in the 1950s, the Dolphin House. Fitting, indeed.

The first thing The Norman has going for it is its central locale  – the hotel is located across King Albert Square, on the edge of the old town-now fashionable quarter of Neve Tzedek and Rothschild Boulevard, the main promenade running through the quarter with its lively cafes and boutiques. And for sun-worshipers, it is just a 10 minute stroll (or a complimentary private shuttle if you prefer) from the beach.

The second visible asset is the edifice itself – the hotel is spread across two original 1920s Bauhaus-style pastel colored villas – one yellow and one powdery blue, linked by a courtyard with a citrus grove. The roof-top infinity swimming pool with a panoramic view over the city, though, is arguably the hotel’s shining star in a city where temperatures can hover over 100 degrees F (it is after all the desert!).

Inside The Norman, you will find fifty spacious, stylishly decorated rooms. Thirty of the rooms have floor-to-ceiling windows, modern baths and hardwood floors. It’s the twenty suites in the neighboring building that are most coveted with high ceilings, double door entrances and balconies. The spacious Penthouse suites have private terraces with panoramic views over the city.

The public spaces are equally beautiful with the choice of two restaurants: a Mediterranean bistro or the Japanese tapas bar on rooftop. Before you retire for the evening, a visit to the 1940’s colonial style Library Bar, a bar that takes the art of the cocktail very seriously and that is actually a library not a faux one.

Order the signature Kumquat Mojito (freshly picked from the hotel garden) or another drink from the extensive cocktail list, grab a book and mill around with Tel Aviv’s most stylish people who come here to socialize and admire the gorgeous Israeli art the owners have collected throughout the spaces.

As a quiet alternative to the bustling bar scene, you can retire to The Conservatory, a guest-exclusive lounge overlooking the hotel’s stunning atrium. A now-ubiquitous spa and gym are both available to guests as are iMac computers in The Study to give you doses of reality, should you need it.

Here is how one friend summed it up after returning from The Norman a few weeks ago:

“The overall design of the hotel was “off the charts”, from the historic renovation to interior design and attention to detail. We stayed in a Garden Suite connecting to Loft room. Rooms were perfectly appointed, bed extremely comfortable, frette linens, great attention to detail. Service at hotel was great, very personal and better than we’ve ever experienced in Israel. Food was excellent, very high quality. We already booked to return next year!”

The Norman is a Small Luxury Hotel of the World (SLH) member and often offers specials (such as 20% off on suites) so check back often.