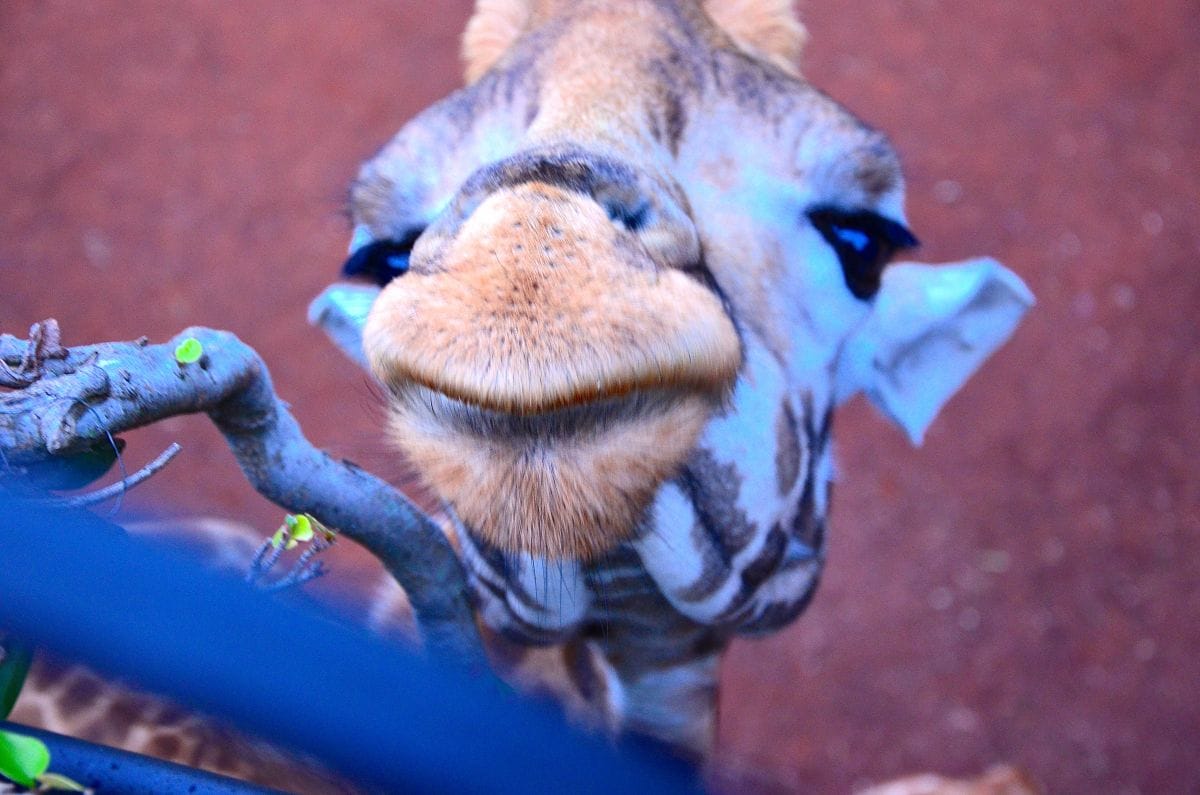 I will start with a tip right off the bat: Book this reservation well in advance. With only ten rooms, Giraffe Manor is one of the hardest tickets to book in Kenya. A stately Scottish lodge built in 1932 on 12 acres of private land and surrounded by 140 acres of forest, Giraffe Manor is certainly appealing in its own right. But the star draw, as you probably have guessed by the photos, are the stunning Rothschild giraffes that reside on the property. Their sheer size, beautiful eyes and personalities will grab your heart from the first meeting.

A “dispatch” by definition means a written message sent with speed. I had every intention of doing live updates on our 10-day trip to Kenya this June, with dreamy visions of myself under a canvas tent, listening to the distant sound of a roaring lion, tapping away on my Ipad at each of our stops along the way.  But Wi-Fi ranging from sketchy to non-existent (at one remote camp, my husband had to climb a large boulder to get even a bar or two), a cracked iPhone and camera lens (which of course occurred on the 2nd day of our trip) and sheer laziness nixed my lofty plans pretty fast. So yes, I am cheating a little using the term “dispatch” but lets just pretend, shall we?

Our trip to Kenya was a long time coming. From the day we left Africa ten years ago on our honeymoon, I have been wanting to go back. This trip wasn’t just an anniversary celebration. It was also an educational awakening for us about the serious threats facing wildlife throughout Africa and the noble efforts to conserve what remains.  We spent two nights each at four uniquely different places that were joined by one common thread – a commitment to preserving the incredible wildlife of Kenya. Each place was more wonderful than the next (a big thank you to Ken Coe from The Nature Conservancy who has intimate knowledge of literally every camp in Kenya and Uncharted Outposts who so meticulously designed our itinerary). Reviews of each are in upcoming posts.  For now, let’s start at our first stop.

I will start with a tip right off the bat: Book this reservation well in advance. With only ten rooms, Giraffe Manor is one of the hardest tickets to book in Kenya. A stately Scottish lodge built in 1932 on 12 acres of private land and surrounded by 140 acres of forest, Giraffe Manor is certainly appealing in its own right. But the star draw, as you probably have guessed by the photos, are the stunning Rothschild giraffes that reside on the property. Their sheer size, beautiful eyes and personalities will grab your heart from the first meeting.

After a 16-hour flight and drive on dusty, construction-clogged roads from the airport, checking into Giraffe Manor was a pleasure.  Crackling fires, hot towels and lemonade awaited us with several of the staff waiting to welcome us. We were offered a upgrade to a room in the adjacent Garden Manor, which opened in late 2011, but we chose to stick with our room located in the original residence as we mistakenly believed we would be missing out from all the activity if we didn’t.

Each of the rooms are named after a giraffe (past and present). We were sad to learn that the giraffe our room was named after, Daisy, passed away this past January. In fact only five of the fourteen giraffes typically on property remained (two babies recently died, one killed by a lioness that incredibly found its way on the property and some passed away from old age). Recently, four new giraffes were transported to Giraffe Manor in late June (see the picture below – how often do you see that??) to enhance the mix. Sadly, one was lost to a tragedy – bringing the current resident count to eight.

It didn’t take long to get to know each of the giraffes. There is Lynn, who introduced herself our first night at dinner. She is the biggest and oldest of the crew – and also the greediest. Then there is Betty, who doesn’t like to be touched so much. Helen can be quite grumpy. Eddie and Abraham, the youngest ones, are still a bit apprehensive and stay close to their mum.  By the second day, we were calling out their names like long-known aquaintances.

There are also a few warthogs on the property. I learned that one tail-less female warthog, who was always lingering around looking for scraps, had no name. The staff christened her Jackie (yours truly, upon my request) and I’m hoping the name sticks. If you get to the manor and see a tail-less warthog, please do a call-out for me.

Lastly, there is Giles. Not a giraffe nor a warthog. He is the General Manager of Giraffe Manor and a gracious and ever-accommodating one at that (as is all the staff at the manor).  And, I just learned, a father to a new baby boy!

The hub of Giraffe Manor, when not sharing your breakfast with the giraffes, is the living room where guests congregate for cocktails before dinner. In a sense, Giraffe Manor is a way station as everyone seems to be coming or returning from one place to the next, beginning or ending their journey. As a result, lots of wonderful stories unfold. During our stay, there was one couple from Abu Dhabi on their way to the Serengeti, another from California on their way to Amboseli and another from India completing their 2-week journey. A delicious candle-lit meal follows at one large table in the very English-feeling dining room at 8 p.m. where the conversation continues with lots of wine being poured…

A word about the rooms:Each of the guest rooms are different with their own distinctive feature. The accommodations in the Garden Manor, built in the

same style as the main house, are obviously newer with more spacious baths. Our room, Daisy, was very small but cozy with a miniscule bathroom. However, the large terrace overlooking the grounds was the reason I chose it. There is nothing quite like the experience waking up at sunrise (the giraffes come up to the house beginning at 6:30 a.m.) with a cup of hot Kenyan coffee and being face-to-face with these beautiful creatures (at least the taller ones whose long necks easily stretch to the 2nd floor) when all is still quiet.

The giraffes of course – each with own distinctive personality.

The staff – warm and friendly and eager to please. The General Manager, Giles Pattison, was an excellent host.

The food – Breakfast is a highlight here as you are accompanied by 4-legged friends looking for hand-outs. Candlelit group dinners in the dining room were quite special. All three daily meals are included in your rates.

What we didn’t love:

The bathrooms were miniscule and showers have low pressure. Rooms are fairly basic in the main lodge and quite small relative to U.S. standards. Still, I

found them charmingly decorated and comfortable. Note that, even though there are safes in the rooms, there are no locks on the doors.

If you are expecting TV or Wi-Fi, this is not the place for you. Frankly, no place in Kenya will have this so lower your expectations. You are in Kenya – its about the people, land and wildlife – so put down your i-phones and blackberries and take it all in.

All the ten double rooms in the Main and Garden Manor are named after the Giraffes. The spacious Karen Blixen Suite is ideal for families. We chose Daisy on the 2nd floor of the Main Manor which is petite but has an extremely large terrace – ideal for feeding the giraffes in the morning as their long necks allow their heads to peek through the rails. Rooms are typically small but each one has a different layout and design.  Next time I would like to try one of the four newer rooms in the Garden Manor.

If you are traveling to Nairobi, there are a few places you need to go to and some to avoid. Unless you need to go there for a specific reason, stay away from Nairobi city center. Roads are being built and it is a dusty pot-hole ridden mess. Traffic is a nightmare, making a typical 5 minute drive into a 30-40 minute ordeal. My advice is to stay in Karen, an upscale neighborhood where many of the nicer lodgings and worthwhile attractions are located.

A visit to the Karen Blixen Museum (where Karen Blixen lived and Out of Africa filmed) is a must. You only need one hour as the house is small and current grounds easily walkable. The guides on the mandatory tour sound a bit robotic as they speak memorized lines but it still is an interesting story to tell. They definitely milk the film “Out of Africa”, based on Karen Blixen’s life as most of the exterior shots and some interior shots were filmed at the house. I would recommend reading the book or watching the movie beforehand.

Although we didn’t have the time to go, a visit to Nairobi National Park – the only protected eco-system in the world near a capital city (only 7 miles from Nairobi’s center) – was a hit with many of the guests at Giraffe Manor. While small compared to most national parks, it spans 29,000 acres and has many species including lions, rhinos, giraffes and zebras.

Last but not least, a visit to The David Sheldrick Wildlife Trust, a very special elephant orphanage nearby, is an absolute. Over 22 orphan elephants (and a few rhinos) currently reside at the nursery. Most are orphans from mothers who were killed by poachers for their ivory tusks – highly coveted in China. You can arrange, through your hotel, to go in the morning to see the babies come for their milk or early evening when they come back from the bush to their barns for the night. If you can, do both. Prepare to fall in love.

Make sure to foster an orphan or two on your way out (they make great gifts) and give what you can. Donations go directly towards the rescue and rehabilitation of the orphans as well as anti-poaching efforts, mobile veterinary units and land conservation.

Hi Jackie. Your trip sounds great. Giraffe Manor
sounds like something like no other. I’d love to visit sometime.
Happy anniversary! Can’t believe it 10 years
Well maybe I can, feels like an eternity sometimes. 🙂

What a wonderful article and photos. Giraffe Manor is definitely on our must-see-before-you-die list. I think Lynn looks more like a Jackie, not the Hedgehog.