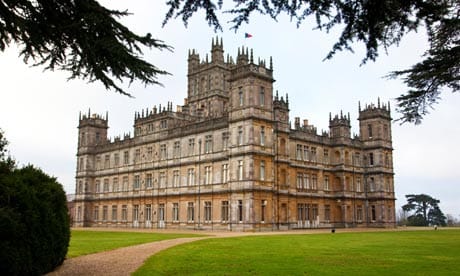 I’ll admit it…I am a sucker for any romantic period drama, especially anything with the names Merchant Ivory, Jane Austin or Edith Wharton attached to it. Downton Abbey is no exception. I’ve been in serious “D.A. withdrawal”, as I like to call it, for the highly successful PBS series that aired last year and have been anxiously awaiting the second season . While most people will be watching the Giants-Falcons playoffs today, I will be getting my fix and be glued to Channel 13 at 9 p.m. to watch my new favorite show (Mad Men, when are you coming back??) to see the costumes, upstairs-downstairs drama and romantic entanglements of Lady Mary, her sisters and the servants.  From what my Brit friends tell me (the second season already aired in the U.K.), the second season is as good if not better than the first. I may have to organize a tea party for the season finale!

For those of you who have been hiding behind a rock, Downtown Abbey has been considered the most successful British drama since 1981 and is even in the 2011 Guiness Book of World Records for the most acclaimed TV show of the Year (silly fact, I know).

And for the rest of you who are inspired by the show and inclined to visit Britain (Summer Olympics, anyone?), you can whet your appetites by visiting the REAL Downtown Abbey – HighClere Castle – where the series was filmed. Both inside and outside.

HighClere Castle, privately owned by the Carnavorn family (Lord and Lady Carnavorn are the current owners. Lots and lots of Earls before that…one who even found King Tut’s tomb!) since 1679, is considered one of the finest Victorian mansions in Britain.  Sadly, you can’t stay there but the Castle and its beautiful grounds (over 6k acres of land) are open to the public. Located in the county of Hampshire , the Castle is only a short 1 hour jaunt from London and you can take a tour, have tea and pretend your an aristocrat.

If that doesn’t suffice, the next best thing is the Four Seasons Hampshire – a stately Georgian country house of 133 rooms – close to the Castle. Only 500 acres to Highclere’s 6,000 but who’s counting? Bring your tweeds (and britches if you plan to ride as that is THE thing to do here) – tons of activities are available at thehotel, including clay pigeon shooting, canoeing, tennis and falconry. Plus the ubiquitous spa and all the great amenities and service one expects from a Four Seasons.

I just re watched the entire serie back to back…cannot get enough of it. Cancelled dinner plans in favor of the new episode starting to night…