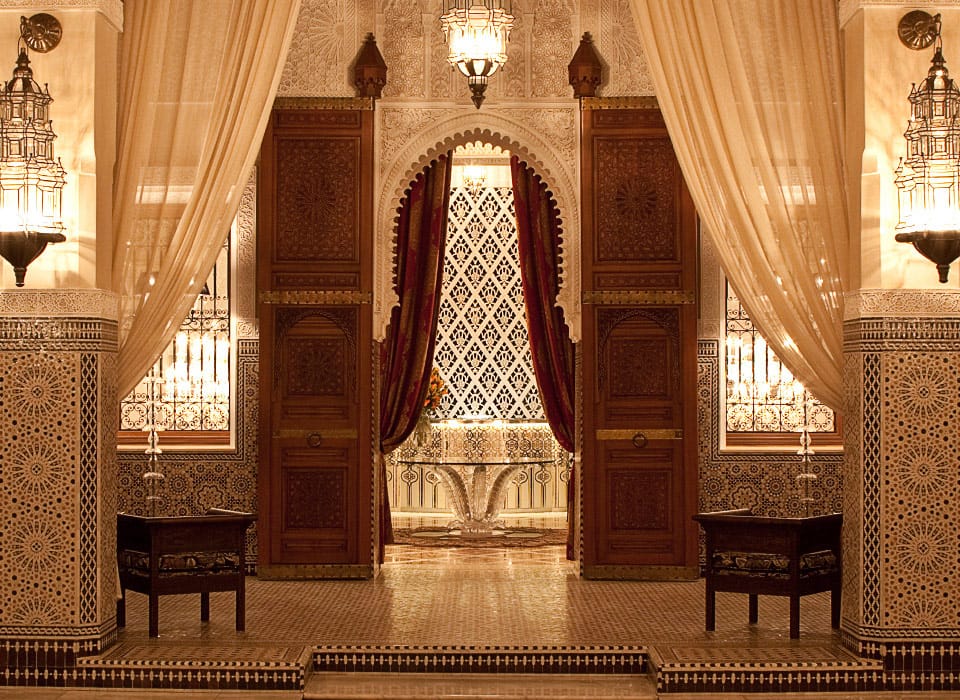 Among the incredible list of five star hotels of Marrakech, Royal Mansour stands out among the rest in its architecture, design and guest service. The palace is a vision from The Arabian Nights and if it looks like it was fit for a king, thats because it is, literally. King Mohammed VI oversaw every detail of the hotel’s construction and design…with no budget constraints. And guests receive special treatment as if they were members of his royal family.

Since its opening in June 2010, Royal Mansour has received many awards and accolades, including inclusion in the 2011 Conde Nast Traveller Hot List. Located just outside the walls of the city and across from rival La Mamounia, Royal Mansour possesses a host of admirable qualities, particularly the incredible craftsmanship you will find throughout the hotel. In fact, over 1,500 artisans were employed to craft the stunning mosaics throughout the property, intricate white metal latticework in the spa, and stucco. The goal, when designing the hotel, was to celebrate the history of Marrakech and feel like you were in a small version of the city. It is easy to get lost inside the hotel, like it would be in the streets of Marrakech, but that is the intention.

Pictures can not really do this palace justice but are impressive nonetheless…lets take a look (and don’t forget to scroll to the end to get information on special packages currently being offered by Royal Mansour):

* All photos courtesy of Royal Mansour

At Royal Mansour, there are no rooms or suites. Each guest has his own  riad – a 3 story building with private butler to fulfill every need.  The 53 riads, which have their own bar, living room and sometimes a dining room, are configured around a central, open-air courtyard. The Riads are 1, 2 or 3 Bedrooms

If you want to really splurge, check in to the hotel’s crowning glory – The Riad d’Honneur, the property’s only four-bedroom, 19,375 square-foot riad  (you have your own office, private swimming pool, home theater, gym, traditional hammam, as well as additional rooms for staff).  Artwork from 80 contemporary Moroccan artists is on display both in the riads and in throughout the property.

Royal Mansour is, in my mind, more suited for a romantic getaway than a family break, but if you need to bring the kids, there is a terrific onsite kids club. Joujou Kids Club has interesting daily activities such as mini lessons in Arabic, art and clay modeling classes as well as an  indoor playground complete with a rope bridge and slide.

The main library of Royal Mansour houses artifacts and books chronicling the history of Morocco – perfect for learning about the country’s rich culture.  Would-be astronomers will love the telescope, perfectly positioned for observing starry nights through the library’s retractable wooden ceiling. If you prefer treats to books, head over to the Patisserie Bibliothèque, next to the hotel’s more casual restaurant La Grande Table, for an assortment of archive of pretty cakes and pale pastel macarons. Indulge, as it is open all-day to satisfy any sweet tooth.

Not to let the men down, The Cigar Library offers more than fifty kinds of premium cigars (cubans too), all housed in bespoke humidors.

Under the supervision of Yannick Alléno, the Parisian Michelin three-star chef who is also head chef of Le Meurice in Paris, there are two main restaurants: La Grande Table Marocaine, the more casual of the two, and La Grande Table Française which is considered amongst the best french dining experiences in Africa.

This is such a great place… I LOVE Arabian decor… Maybe one day I will see it for myself. Thanks for sharing!!