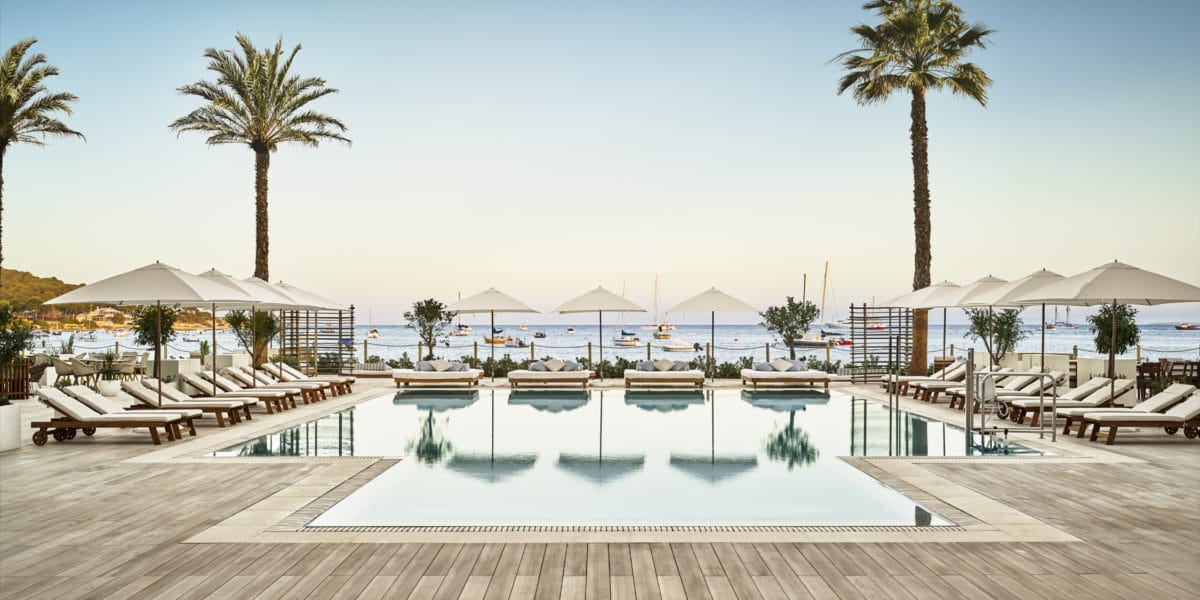 Ahh Ibiza… the chic, white Balearic island where music, boho fashion and spectacular seafood is practically a religion. The hip island saw a major boost in tourism this past summer due to Nobu Hotels latest hotel opening in June (other Nobu Hotels can be found in Miami, Las Vegas, Malibu and London with 10 more on the way). I hopped the first plane I could once my kids were off on holiday with their Dad to check out all the buzz about this ‘ultimate playground for grown-ups’.

If a five-star hotel opening is not enough for you to make the 30-minute jaunt from any major Spanish city, then the nightlife attractions are surely worth it as Ibiza has recently taken it up a notch. While the clubs that Ibiza is known for are still going strong and popular with the beautiful young things, sophisticated yet racy cabaret shows are drawing in upscale older crowds.  And, luxury family-friendly beach clubs have just about popped up on every corner of the island appealing to families. Still not enough?   Formentera, the smallest of the Balearic islands and a hippie paradise, is only accessible from Ibiza so there you have it!  #sold Taking a page out of DeNiro’s restaurants and movies, the hotel is exactly what you might expect.. effortlessly chic in terms of decor (think lots of white with a mix of soothing shades of blue). Plus a show stopper crowd who goes to Nobu for the scene but appreciates not being seen as no one cares about celebs (everyone is either a celeb or a person who does not put a value on that status).

The pool is the epicenter of the resort, filled with ridiculously cool European families – music moguls, celebs such as Bruce Springsteen and Bethenny Frankel (not that I am in any way putting her in the same status as Bruce) and Victoria Secret models (I had to sit next to Doutzen Kroes and vowed never to eat again…still working on that). There are 152 rooms and suites (1-3 bedroom) in the hotel which either face the main street or the pool/bay. We chose the latter.  I highly recommend the pool/bay view rooms as the view is far more gorgeous, especially at night when all the trees are illuminated. And, frankly it is less noisy. The Beach Clubs not to miss