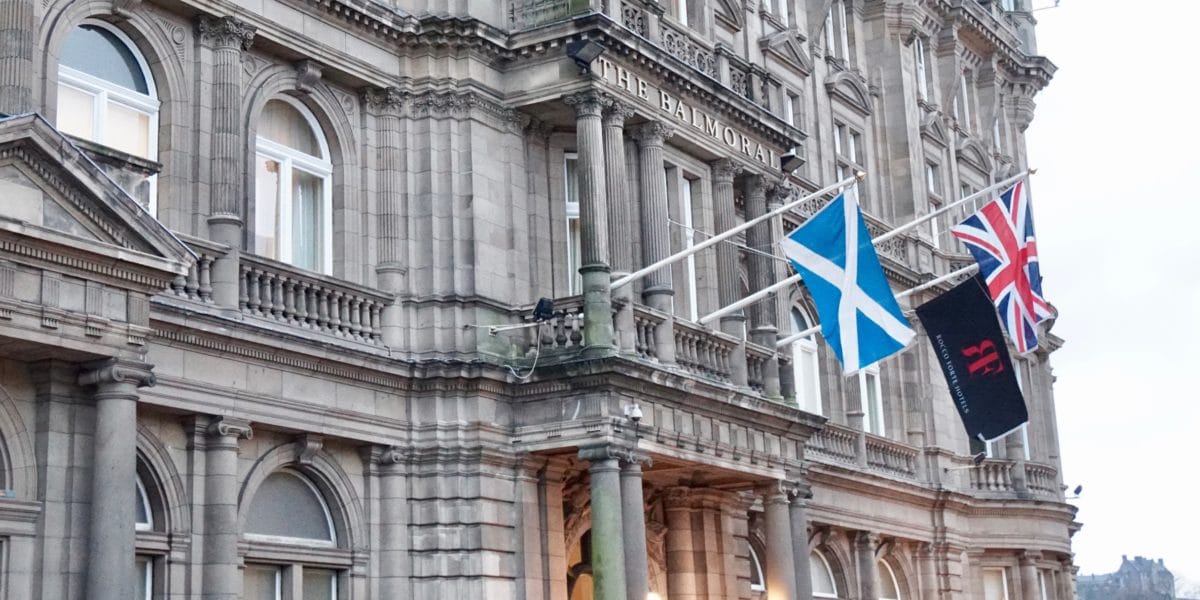 Just Checked Out: The Balmoral, Edinburgh

During our second week of Spring Break this March, we decided to take a visit to Scotland as our oldest daughter, a high school Junior, was interested in checking out the universities of St. Andrews and Edinburgh.  It was an easy decision to base ourselves for several nights at The Balmoral, a Rocco Forte property. Having stayed at their hotels in Berlin (Hotel de Rome), London (Browns), and Rome (Hotel de Russie), we were already loyal fans of the brand that is known for its design-oriented landmark hotels with deep connections in each of their local surroundings. Approaching the hotel for the first time, we passed the medieval fortress of Edinburgh Castle looming over the city on top of Castle Rock and then ultimately descended towards the majestic 115-year old hotel, The Balmoral, located on Princes Street where the Old and New Town intersects. To say the hotel makes a distinctive first impression is an understatement. Arthur’s Seat, the picturesque mountain that is an ancient volcano, looms in the backdrop. A traditionally dressed tartan-clad doorman waits at the grand entrance to greet and assist you. Depending on the day he may be in a kilt but at the very least, he’s tartan-clad. The Balmoral opened its doors in 1902 as the North British Station Hotel. Similar to The Caledonian or ‘The Caley’ as locals refer to it (now the Waldorf Astoria Edinburgh since 2012), The Balmoral was originally built as a railway hotel. Porters in red jackets would greet the guests off the train at Waverly Station below the hotel and whisk them to the hotel through a lift at the station hall directly up to the hotel reception desk. The clock tower and its turrets atop The Balmoral continue to remain one of Edinburgh’s most notable landmarks even after Sir Rocco Forte acquired the hotel in 1997. The clock was always (except on Hogmanay – Scotland’s New Years Eve, which it is exactly on time) and continues to be set three minutes fast so that you don’t miss your train. It is still exceptionally popular to take the four-hour train ride from London and arrive at Waverly station underneath the hotel. As a matter of fact, the next time I come to Scotland, I will arrange to do it this way.

Whether you arrive by air or by train at the Balmoral, today you are welcomed by an understated and beautiful lobby adorned by a grand floral arrangement in its center (something you can expect in every Rocco Forte hotel) that changes weekly. The hotel is just in the finishing stages of a five-year refurbishment plan that has included the renovation of most of its hotel rooms as well as all of its restaurants and bars.

Of the 188 rooms at the Balmoral, there are 168 rooms and 20 suites. Suites range from 12 Junior Suites starting at 500 square feet to the largest, Scone and Scrombie (named after Scone Palace in Perthshire) one of the largest suites (at 721 square feet) in Scotland, which was just unveiled after a beautiful renovation that includes cashmere turndown service with the luxury brand, Hawico. All the Suites are named after Scottish castles and rivers with the exception of one special suite, #552. This is the J.K. Rowling Suite, where the famous author completed her final Harry Potter novel in 2007.  Recently renovated, the suite includes a signed marble bust of Hermes, her writing desk and a brass owl knocker on the door.

The current five-year renovation which is nearing completion includes all of the Junior Suites, Suites and external facing rooms overlooking the Old Town. As with the other Rocco Forte hotels, the design and decor was expertly supervised by Olga Polizzi (younger sister to Sir Rocco, there is a lot of talent in the family) who has brought a clean, contemporary style to the rooms while adding layers of historic prints, fabrics and plaids to provide Scottish charm.

We stayed in two renovated connecting Deluxe rooms (there are only two sets in the hotel) with views of the castle, 350 square feet in size. This combination (04/06) was simply sublime and I recommend it highly for a family of four as it is very spacious. It can even comfortably fit an additional person for a nominal daily fee for a rollaway cot.

I was able to visit a few rooms during my stay and highly recommend the newly renovated rooms that have a fresh, updated look. Additionally, it is absolutely worth it to get an exterior facing room of the Old Town, particularly of the Edinburgh Castle. The Junior Suites and the Deluxe Rooms, in particular, are lovely.

There are several wonderful places to eat and drink at the Balmoral. It should be noted that some of these are in the midst of changing this month as part of the finishing stages of the hotel’s refurbishment.

Scotch Whisky Bar was my favorite spot in the hotel as I love a good bar in a city hotel where I can meet friends for drinks prior to evening plans. Scotch has over 500 single malts, including their own 10-year-old single malt, blends and vintages.  The kilt-wearing bartenders also serve as certified whiskey ambassadors and they really know their stuff. In addition to all those whiskeys, they also have some wonderful local Scottish vodkas for those like me that like to stay with the vodka.

Palm Court with its glass dome and Venetian chandelier is by far the most beautiful spot in the hotel to take breakfast. The delicious buffet breakfast, included in our Virtuoso rate, includes local Scottish dishes that may seem unappetizing or strange to American taste buds. This includes locally smoked haddock, Aberfeldy oatmeal, Haggis which you see on menus everywhere (I refused to try it), vegetarian kedgeree ( a flaked fish such as haddock cooked with rice, parsley, curry powder and cream which was reintroduced as a breakfast dish from India) and blood pudding which is blood sausage typically made from pork, pork blood and oatmeal . Not as bad is it sounds. We had afternoon tea one day at the Palm Court, which is open all day. A harpist plays daily in the loge of the gallery above everyone. Just sublime.

We also ate one night at the Number One, a must once during your stay (it is only open for dinner). Michelin-starred for 16 years in a row, the restaurant serves delicious and fresh modern Scottish dishes. Two other dining venues currently at the hotel when we were there are in the midst of changing. Replacing current Hadrian’s Brasserie and The Balmoral Bar will be a new lifestyle space and brasserie opening this month in May by three Michelin star chef Alain Roux and his son Michel Roux. The 120-seat brasserie, whose name has yet to be announced, will feature classic French dishes inspired by the finest Scottish ingredients. The opening of the restaurant completes the hotel’s five-year refurbishment plan to update the refresh the rooms and food and beverage outlets.

We found the staff at the Balmoral all round attentive and warm.  Special recognition must be made to Andy Fraser and David Musk at the concierge desk who went above and beyond to make my stay memorable, spending time prior to my arrival to help me craft my itinerary for the week.

I’ve always admired the Rocco Forte brand properties for how, with each location, they’ve converted historical buildings integral to the city’s history into chic sophisticated places to stay while still maintaining the integrity and character of the original structure. Yet, there are particular aspects about each of the properties that I have stayed at that holds my affection.  In Hotel de Rome in Berlin, I enjoy the overall ambiance, location, the lobby, and the rooftop and lobby bars. In Rome, the courtyard garden at the Hotel de Russie is just a magical place. And at Browns, my go-to in London, I Iove the cozy side street location in Mayfair and the rooms are simply heaven.

The Balmoral, the very first property in the Rocco Forte Collection in a location where Sir Rocco Forte spent many of his childhood years, is obviously a very special place with a long Scottish heritage. For me, it was the historic majesty of the property, our beautifully styled rooms with views of the medieval Edinburgh Castle from our window and of course, the Whisky Bar that left us with the most lasting impressions. We look forward to returning sooner than later to this distinguished Edwardian hotel. WHERE TO EAT IN  EDINBURGH

The food scene in and around Edinburgh is fantastic. Take the time to try some of these standout places on our list:

EXPLORING EDINBURGH AND BEYOND One of our key objectives for this trip was to visit the campuses of University of Edinburgh and St. Andrews.  St. Andrews is a 75-90 minute drive northeast of Edinburgh and even if not going to golf or see the university, it is well worth the trip. Meander on the way there or back through the various fishing villages dotting the coastline that make up County Fife. Also worth the diversion is a stop off in the village of Falkland, where the premiere episode of the popular Starz series Outlander took place, in particular, the Covenanter Hotel. St. Andrews itself is a seaside town northeast of Edinburgh known for its many golf courses, most notably the Old Course and the landmark Swilcan bridge at the 18th hole. The vistas are simply breathtaking. Another notable area in St. Andrews not to be missed is the West Sands beach which lies directly ahead of the Old Course, where the film Chariots of Fire was filmed (remember the scene of the guys running on the beach to that Vangelis theme?). Words don’t do it justice.

The raw majestic beauty of Scotland is unparalleled to most any place I’ve seen.  Perhaps a mashup of Iceland and Fogo Island, both places I have traveled to recently. Many times during my stay in Scotland, I remarked how the topography reminded me of both places. Finally, there is the University of St. Andrews itself, founded in 1413, and now forever tied to a commoner meeting her Prince Charming (AKA Kate and William).

Without all the tourists and souvenir shops, I felt a much more authentic vibe here then I did at some of the historical attractions back in Edinburgh.

That is, with the exception of the University of Edinburgh, founded in 1582. The university itself is deeply embedded in the fabric of the city of Edinburgh with many of the buildings in the Old Town owned by the university. Some notable alumni in its ranks include Charles Darwin, Sir Arthur Conan Doyle (Sherlock Holmes) and Robert Louis Stevenson (Treasure Island, Dr. Jekyll and Mr. Hyde). We loved how intertwined the university is with the city. Both are definitely worth a visit, whether you have a child consider going to university there or not.

We spent one day touring the nearby stunning countryside (see Tips) with a local private guide we hired who we could not recommend more highly. For 2018, your Virtuoso rate at The Balmoral includes: