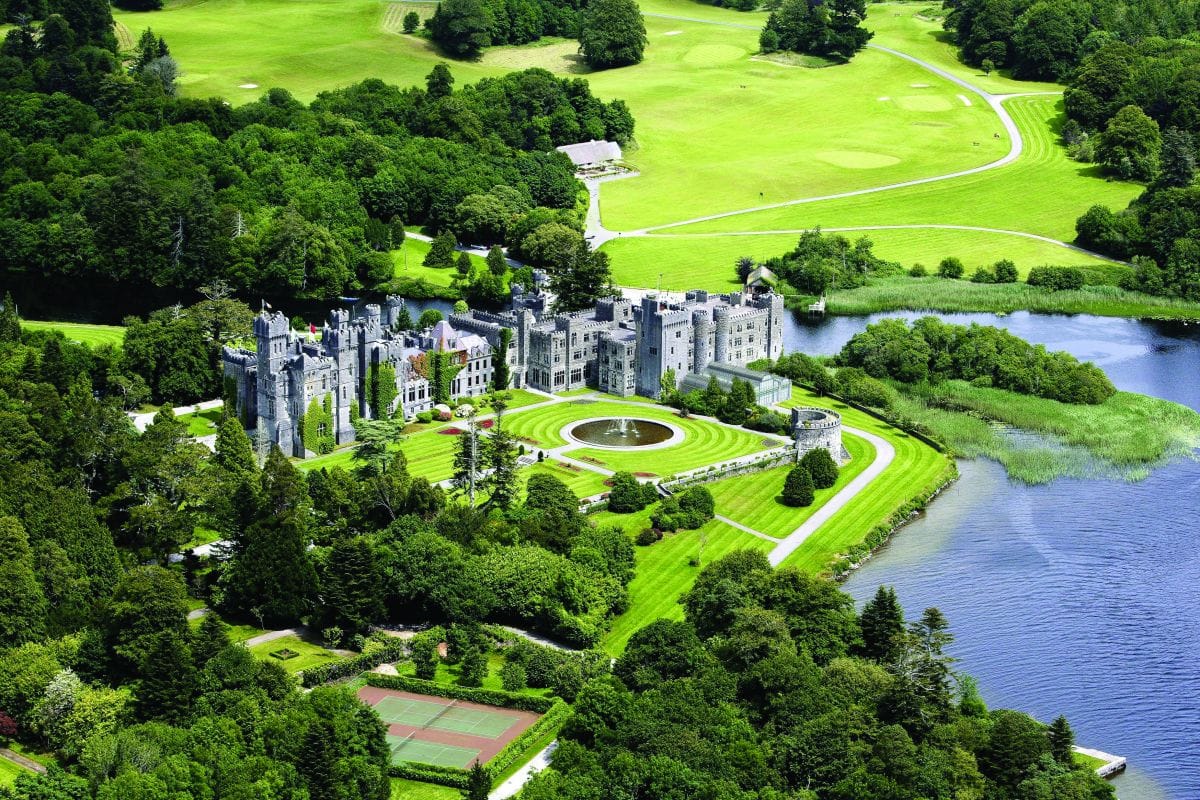 England may have Downton Abbey (aka Highclere Castle) and Scotland may have Castle Leoch (for all you Outlander fans), but Ireland has the grand daddy of castles – one that we are currently obsessing over since it re-opened newly improved three weeks ago – Ashford Castle. This 13th century castle right in the village of Cong in County Mayo, one of the most beautiful and few unspoiled villages in all of Europe, is a luxury getaway for travelers of any age. Come join us for a peek inside!

Previously the home for over 90 years by the Guinness family (creators of the famous beer), the 350-acre estate was sold and began operating as a hotel in 1939 welcoming royalty, celebrities and heads of state. Notable guests have included Ronald Reagan, Grace Kelly (Princess Grace), Fred Astaire, John Lennon, Oscar Wilde, John Wayne and, dare we include in this roster, Brad Pitt.

While it may not be a fixture on TV as the others mentioned above, Ashford Castle was used as the backdrop for the 1951 film, The Quiet Man, starring John Wayne and Maureen O’Hara. With such spectacular rivers, lakes, woodlands and mountains around you, you really can’t go wrong.

Fast forward to 2013.  Ashford Castle was purchased by Red Carnation Hotels, a boutique hotel company with 16 boutique hotels under its wing such as Milestone and Belgravia hotels in London. Under the creative direction of Beatrice Tollman, RCH’s President and Founder, the massive undertaking to meticulously restore every inch of the castle began. Trust us when we say no dining room linen or window pane (820 restored windows, to be exact) was left behind.

The restoration took an impressive two years and a cool $75 million, before the castle reopened its doors three weeks ago on April 17. The 82 redecorated rooms and suites are fit for royalty, with original artwork and hand-selected antiques and furniture (even some pieces from Christie’s auction house).

Although there’s a strong nod to the castle’s past, rest assured that Ashford Castle is fully equipped with wifi, interactive TVs, and movies on demand to keep you connected to this century.

It wouldn’t be Ireland if some spirits weren’t in the picture – did we mention each room comes stocked with Irish liqueur too? If you prefer to mingle with the guests with a pint of Guinness in hand, you can do so at many of the ‘drinking establishments’ on the premises such as the Prince of Wales Bar or the Dungeon Bar (that would have fit right in to a scene at Hogwarts).

I can just picture myself now in one of these Italian-style bathrooms…..

Many of the new additions and services appear to cater to the family market and the owners have obviously spared no expense. Now you will find spacious family rooms, a 32-seat cinema (complete with popcorn service and candy dispensers), a billiards room, children’s game room with a complimentary LEGO butler service (!) and an indoor pool (opening this summer). There are also personalized gifts and services for the little ones, including homemade cookies, books, mini prince/princess slippers and robes, children’s afternoon tea service, and a babysitting service if you want to venture to the village taverns at night.

Adults, no need to fret as there is some new indoor entertainment for you too while the kids are at play including a rooftop cigar terrace, wine cellars, a new spa, and gym.

While there is certainly enough entertainment to keep the entire family occupied inside, you won’t want to as Ashford Castle is renowned for its spectacular surrounding scenery and many outdoor activities.  There is something for everyone and for every taste. Take your pick: horseback riding through the beautiful woodland paths (this is the largest equestrian center in Ireland) and pony rides for the little ones, a nine-hole Eddie Hackett golf course, all-weather tennis courts, or trout/salmon/fly-fishing by boat (three lakes to choose from) with an Orvis-endorsed ghillie or guide. That’s just a sampling.

For all you falconry die-hards out there (no judgement passed), there’s also been improvements to the School of Falconry – the oldest in Ireland – including the addition of three Peruvian Harris hawks (and this handsome falconer below) bringing the number of resident hawks to 35.  Don’t miss saying hello to the only resident owl, Dingle, who has been there since 1999.

The Harry Potter (or Hermione) inside of you is bound to come out at some point!

If you’re looking for history, adventure and activity in a stunning setting, this is definitely the spot to check out with the family this summer. For a little more motivation, check out the special family offers here to combine with the VIP amenities for Inviato readers here.

Through our partnership with Classic Travel, Virtuoso benefits include:

Who’s ready for archery followed by a drink at the impressive Prince of Wales Bar?