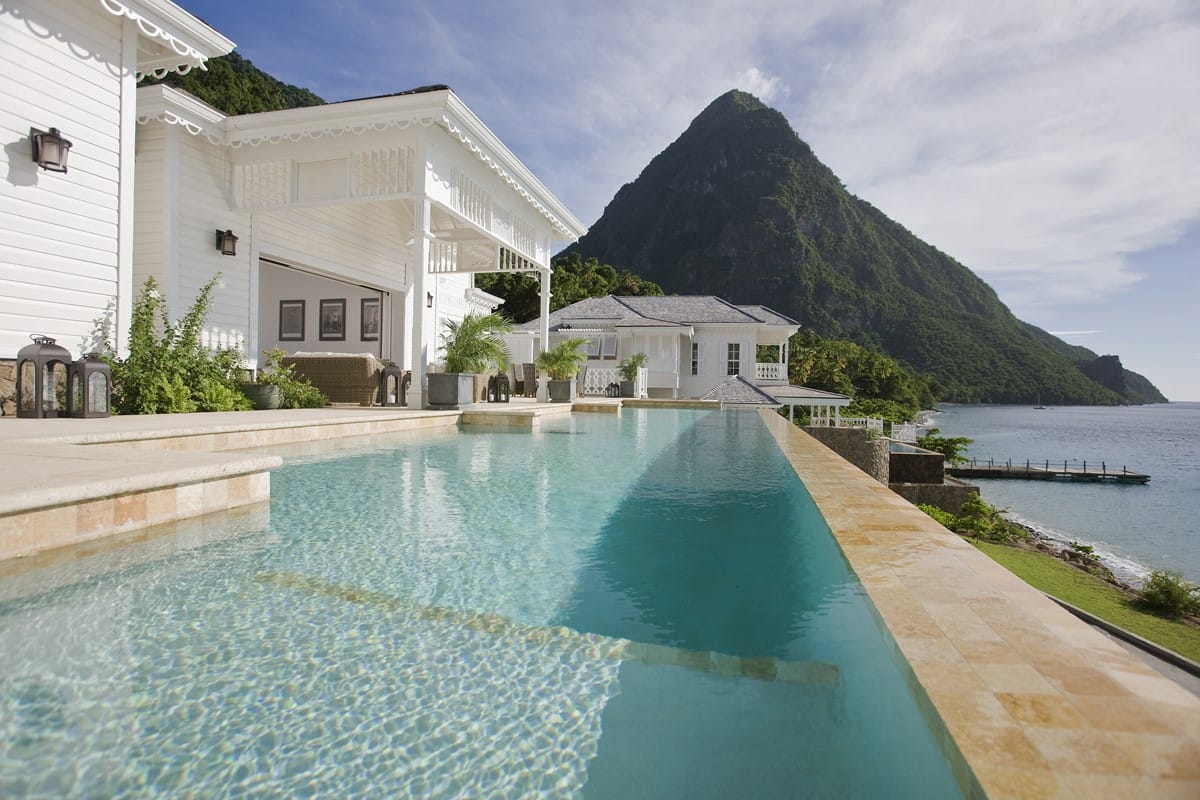 How sweet it is: Sugar Beach

Happy New Year! My first post entry for 2013 is a pretty sweet one. It seems like an eternity since Jalousie Plantation in St. Lucia announced it would be under new ownership of the Viceroy brand after it massive $100MM renovation. At first, the resort was to be renamed The Tides. But, as of December 1, it is now officially Sugar Beach, A Viceroy Resort.

Patio of the Great Room

View from a villa

Jalousie – I mean, Sugar Beach – is probably one of the best resorts you may not have heard about. Even though it has been on many Top lists (it was just recently named one of the top hotels in the Caribbean by Conde Nast Traveler magazine), it’s been under the radar compared to some of the other five star Caribbean resorts we all read about so often. Not for long though. With the Viceroy engine behind it, Sugar Beach will certainly be getting a lot more deserved publicity soon. And, it didn’t hurt that Gwyneth Paltrow just blogged about her recent stay there over the holidays with her family.

I visited the resort (then still Jalousie) in March 2011, after most of its renovation was completed but before the more recent 30 new villas were erected (they were under construction when we left).  It was a trip that almost wasn’t as our first attempt to go during the Christmas holidays was thwarted by a massive snowstorm. Thankfully, we were able to visit in the Spring.

With praise to Jet Blue, getting to St. Lucia couldn’t be easier with direct flights from New York City. I wish I could say the same about the drive: Sugar Beach is about an hour drive from the airport and is not for the faint-hearted with its dramatic twists and turns. To be fair, the island was still recovering from the devastating effects of Hurricane Tomas and some roads were still closed due to mudslides.

Once you arrive at the resort, you forget about all that. The scenery is simply breathtaking.  I don’t know any other place in the Caribbean with such a stunning setting.  Why? Sugar Beach, with its white sandy beach, has the advantage of being lodged between the majestic Pitons (a UNESCO World Heritage Site) – two volcanic cones that tower 3,000 feet above sea level.

The 100-acre property was originally an 18th century sugar plantation (hence the name Sugar Beach) and owned by the former accountant for the Rolling Stones (I’m guessing he did pretty well!).

There are 53 accommodations spread out over the property consisting of luxury rooms (Sugar Mill rooms), villas, beach cottages and residences. All of the spacious villas, which is where we stayed as a family, are elegantly styled in West Indies/British colonial design in a palette of black and white and loaded with modern amenities and luxurious touches (hello Egyptian cotton sheets!).

The villas are perched high on the hill to enjoy spectacular views of the pitons and the sea. The downside to having such views – a sacrifice I think is worth making – is that you need to take a shuttle to the beach and restaurant (unless you want to take a 15 minute walk up or downhill).  Despite having to take a shuttle, we found it very prompt and it often arrived before we were ready.  For those that prefer to be beach front, there are several new beachside bungalows to choose from.

One of the attractions of Sugar Beach is the spa: Sugar Beach possesses one of the most beautiful spas I have seen. The 9,400 square foot Rainforest Spa has seven thatched tree-house treatment huts several feet above ground in a forest, accessed by interwoven wooden walkways.  Treatments themselves – with names such as Hot Candle, Lava Shell and Royal Bamboo – feature local plants and fruits.

There are two restaurants at the resort: Bayside which is on the beach and where you have breakfast and lunch and the Great Room, which is in the original plantation site. The latter was beautiful but service was a little too slow for us, especially as we were with our young children who fell asleep in the middle of dinner.

Also in the main building is the very modern-design Cane Bar.  The bar felt a little misplaced with the rest of the ambiance of the resort and was empty during our stay. But it appears they serve sushi now and have a professional rummelier and rum bar.

What we loved: There is quite a lot to love about Sugar Beach:

What we didn’t love:

Rooms to get: It’s hard to pick a bad one here. If you can splurge, get the two-bedroom luxury villas, spacious at almost 2k square feet in size. The new beach villas look incredible.

Don’t Miss:  Above Sugar Beach, about 1,100 feet above on a cliff, lies Ladera, an intimate 32-suite (all with open walls) resort that used to be one of St. Lucia’s oldest cocoa plantations.  I highly recommend going here (just a 10 minute drive up from the hotel) for drinks to watch the incredible sunsets and dining after at Dasheene, the hotel’s restaurant.

Skip:  The cocoa plantation tour near the hotel. It was a below average experience for us as it was more a tour of plants in the forest followed by a requisite lunch than a chocolate making experience. Moreover, a poisonous centipede landed inside my bag during the tour and which made for a less than welcome discovery when I reached into my bag later that day.

For the little ones: For kids, there is plenty to do:

Be sure to check ongoing special offers and offers on the Sugar Beach website.

Images courtesy of Jalousie Plantation and not for reproduction

I want to to thank you for this good read!! I absolutely enjoyed
every little bit of it. I have got you book marked to look at new stuff you post…