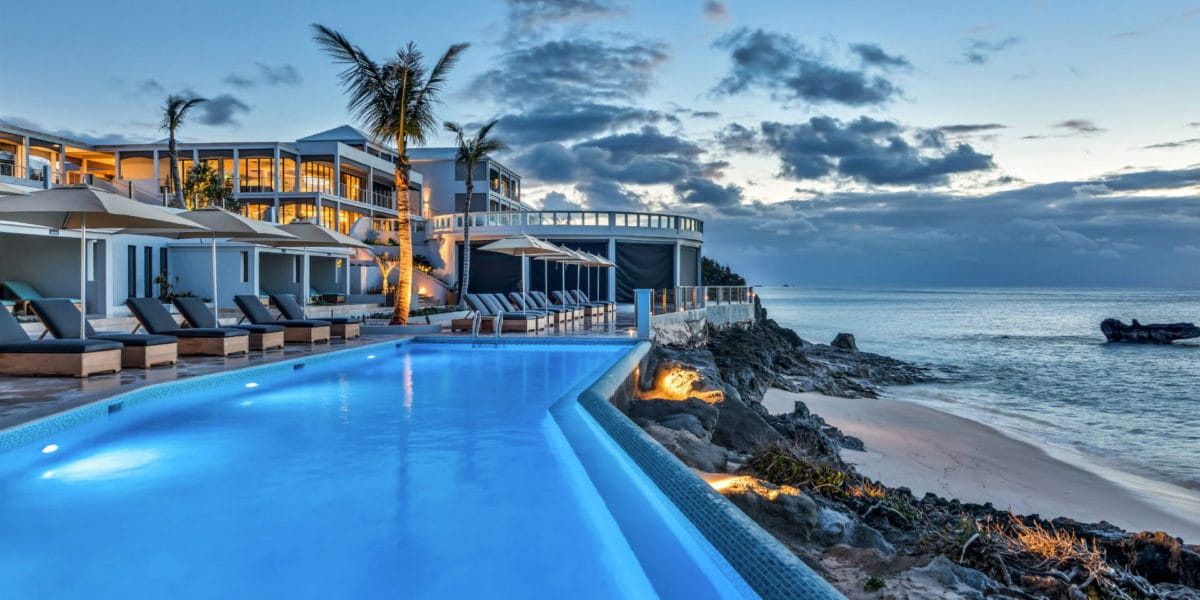 Postcard From: The Loren at Pink Beach, Bermuda

A sleek and modern new boutique hotel in Bermuda

Being a former fashion editor for many years, when I think of fashion shows I generally think of cities like Milan, Paris or New York. I was both surprised and delighted when I got an invitation to Bermuda to stay at the sleek new hotel, The Loren, that was hosting a masquerade party to officially kick off Bermuda’s fashion festival in their stunning new spot. Of course, I accepted, what better way to celebrate Halloween? I was not disappointed, to say the least. I was hosted by Steven King, an English financier who purchased the property of the former home to the Pink Beach Club on an eight-acre stretch of cliffside beach on the southern coast of the island called Pink Beach. In fact, you can find the former hotel’s signage hanging in the hotel’s namesake outdoor restaurant. Three years later, the new hotel opened in Spring 2017 but this fashion festival kick-off masquerade party also served as a fun excuse to celebrate the opening of The Loren. King originally enlisted the help of his young daughter in naming the hotel after thinking of naming it after a large rock that sits in the water directly in front of the hotel. But when he was informed that the rock’s name was ‘Halfway’ (an old military bearing mark on the water route between The Castle fort on Castle Island and the fort at Devonshire Bay), he understandably decided

against naming the hotel similarly. We agree, The Loren rolls off the tongue much better!

What makes this hotel so noteworthy? A few things. First of all, this is the first new hotel to be constructed on the island in several years. It’s modern, sexy and sophisticated with an impressive decor and an equally impressive art collection which includes a group of black and white photos depicting some of the well-known guests who have visited the island over the years. The design and attention to detail from the bed linens, the luxurious bathrobes and room amenities to the carefully selected books, private art collection displayed throughout the hotel and even the custom-designed carpets (a map of Bermuda) would challenge any other luxury hotel in a cosmopolitan city. King, who spent many years traveling for work, was ‘hotel obsessed’ and spent years noticing design details in every room he stayed in, even counting the steps between different objects in his various rooms. This is certainly not the old pink and green, overstuffed sofa and shell patterned Bermuda of our parent’s day. There seems to be a wave of new hotels coming to the island. At the masquerade party, I met the couple opening a Ritz Reserve which is scheduled to open this summer and there were whisperings of the St. Regis opening a new hotel as well. All of this seems like a bittersweet stroke of luck given the horrible news of massive hurricane destruction in much of the Caribbean lately.

The Loren feels intimate as if you were at someone’s posh modern hideaway. It was refreshing to not have to feel stressed out about scheduling anything during my stay. It was very easy getting tables at the two on-site restaurants, the gym had only a few people at a time and the hotel was even able to score me a last-minute hair appointment right before the masquerade party.

All 45 ocean-view suites at the hotel are very spacious at over 600 square feet, with floor-to-ceiling windows and large comfortably furnished terraces. The light, airy and modern decor feels very relaxing and I inevitably spent most of my time out on the terrace looking at the turquoise waters and enjoying the breeze. This extra outdoor area is such a bonus and truly makes the room feel super deluxe.  There are spacious marble bathrooms with free-standing tubs, Malin & Goetz products, rain showers and the most comfortable and luxurious bathrobes I’ve worn in a long time. Outside on the grounds, you will find two large heated infinity pools cliffside, stylish cabanas and of course the spectacular stretch of private pink-sand beach. Yes, the sand truly is pink (proof, below)! Within the hotel, there is also a small gym, a spa with four treatment rooms, a hair and nail salon, and a kids club. bar and the hotel’s two restaurants below: Marée, an elegant dining room and outside, the Pink Beach Club (PBC) which is more casual for all-day dining. The latter also has an incredible view out over the Atlantic Ocean – perfect for the requisite Instagram shot to make your friends at home jealous. Whatever you do, do not leave without sampling the dry-aged Pink Burger – it is crazy good.

The Loren is open year round and it’s important to note that Bermuda is a surprisingly fast and easy destination considering it is less than a 2-hour direct flight from most East coast airports. I should also mention that my stay on the very last weekend in October was warm and sunny with 80-degree daytime temperatures and easy warm swimming in the ocean. For a quick getaway, this makes The Loren an ideal spot to head any time of year.

The Loren at Pink Beach, Bermuda

Contact [email protected] to book your stay at The Loren.

Our Favorite New Hotel Openings for 2017