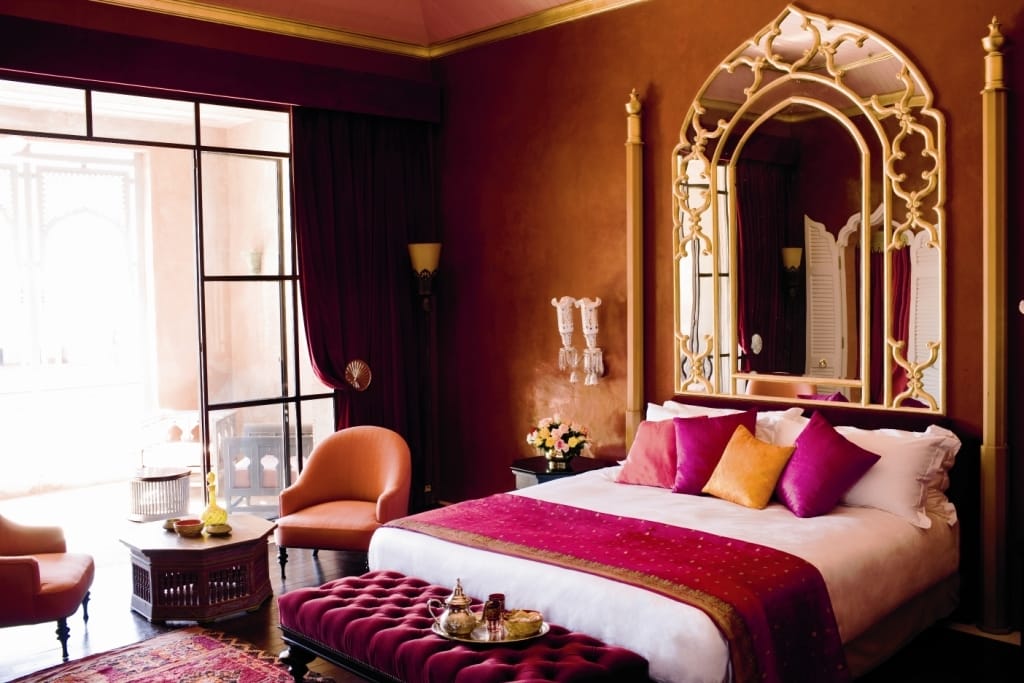 The hottest new hotels in Marrakech

It seems like a new hotel is popping up every day in this exotic cosmopolitan city. To say that Marakkech is enjoying a hotel boom would be quite an understatement.  Although the Marrakech Bienelle – an incredible cultural event in its fourth year celebrating literature, art and film  – ends next week, there is no better time to go to Marrakech then this Spring when so many choices of lavish accommodations are available (and, consequently, enticing hotel opening rates to lure you from going to the competition). But how to make sense of all the options amidst the flurry of recent and future hotel openings?

That is where I come in. I already wrote about the much touted 2009 re-opening of La Mamounia, which has set the luxury bar quite high.  Below is a quick snapshot of the seven most interesting newcomers to arrive (and soon to make their mark) on the scene and special offers to entice you to use those unused Delta air miles in the direction of Casablanca. Make a cup of spiced tea and spend some time on their websites to determine which hotel is best for you (even if just to dream).

Previously set to be the Mandarin Oriental, Taj Hotels has taken over management responsibilities from the Mandarin Oriental, who had delayed the opening several times and then abandoned ship. The hotel was originally set to welcome guests this past Fall under the Taj brand, but that has not happened and its all quite a mystery when the doors in fact will open (rumors say next few months). But I include them here because the ornate hotel interiors and grandeur are too fabulous not to.

Many of you SATC afficionados will recognize images of the hotel as it was was also the filming site of Sex and the City II (where all the royal suite scenes took place) . Comprised of 161 guest

rooms(including 25 suites and one royal suite), the hotel sits on 124 acres just 10 minutes outside of the old city walls and offers a stunning backdrop of the Atlas Mountains. The interiors are inspired by the country’s aristocratic Berber Kasbahs combined with Ottoman, Indian and Oriental influences.  Along with several specialty restaurants, the Taj will also house a 40,000 foot Spa with Ayurveda rooms, hammams and a fitness centre. This is definitely for those who are looking for an over-the-top experience.

If you want to be a little closer to the action, then check out the new Four Seasons that opened last June. This 140 room/27 suite walled resort is well situated in the center of city across from Menara

Gardens on its own 40 acres.The design is certainly a more modern take on Moorish architecture with the typical Four Seasons feel.  There are plenty dining options (including the poolside Azzera Grill and recently opened rooftop lounge Blue D’orange). What sets this hotel apart from others is its attention towards families. With two separate pools for children and adults as well as kids and teen clubs, this is the safe and easy solution for those traveling with kids in tow. Still, I found the interiors in the photos a bit bland and “four seasonish’ to be excited about this place.

Grace Leo works her magic on yet another hotel – this time a 56-room boutique hotel on 14 acres just outside the city. Set to open next month in March, the interiors, designed by Jacques Garcia (who also did La Mamounia), are sure to be stunning. 2 restaurants, 5 riads and indoor/outdoor pools are planned. What will set Selman apart from others, however, is the stable of 16 Arabian horses – at the disposal of guests – to fulfill any Moorish fantasy.

Another newcomer set to make a grand entrance to the Marrakech scene is Palais Namaskar, a LHW hotel that is sister to Le Bristol in Paris and part of the Oetker collection.

Namaskar is located on 12 secluded acres outside the old city with 41 units comprising rooms, suites, villas and two mini-palaces.  The decor is Eastern Contemporary Feng-Shui (I don’t know any other way to describe it). Opening April 6, the Palais Namaskar is offering special opening packages on its web site.

Rocco Forte‘s all-suite hotel of 80 villas set in the palm groves is expected to open some time in Spring 2012 but this looks like a potential delay until Fall or Winter 2013 (the web site says “to be confirmed”.  When it does, there will be plenty of on-site action with 18-hole golf course, tennis courts and 6 bars and restaurants. The pictures show a contemporary design with some Moroccan influences but quite frankly none were interesting enough to put up on this post. Hopefully, as new photos get released they will be enticing enough to do an update on this hotel development.

Are we surprised Starwood has set its sights for a W hotel in Marrakech? Of course not!  All i know is this 150-room hotel, set to open ‘soon’, will be located right outside the old city walls and feature several restaurants, a hip lounge, and two swimming pools. Definitely a choice for the 20-30 something crowd.

The last hotel on my list, Royal Mansour, is in my view a stand-out and deserves a post all on its own. Check out tomorrow’s post for a spotlight on this fab hotel.

Thanks for sharing those beautiful hotels.I like the Four seasons hotel.I want to stay there in our Christmas vacation.My family wants to celebrate this special event abroad for a change.I’ll share this to my parents.Thanks!