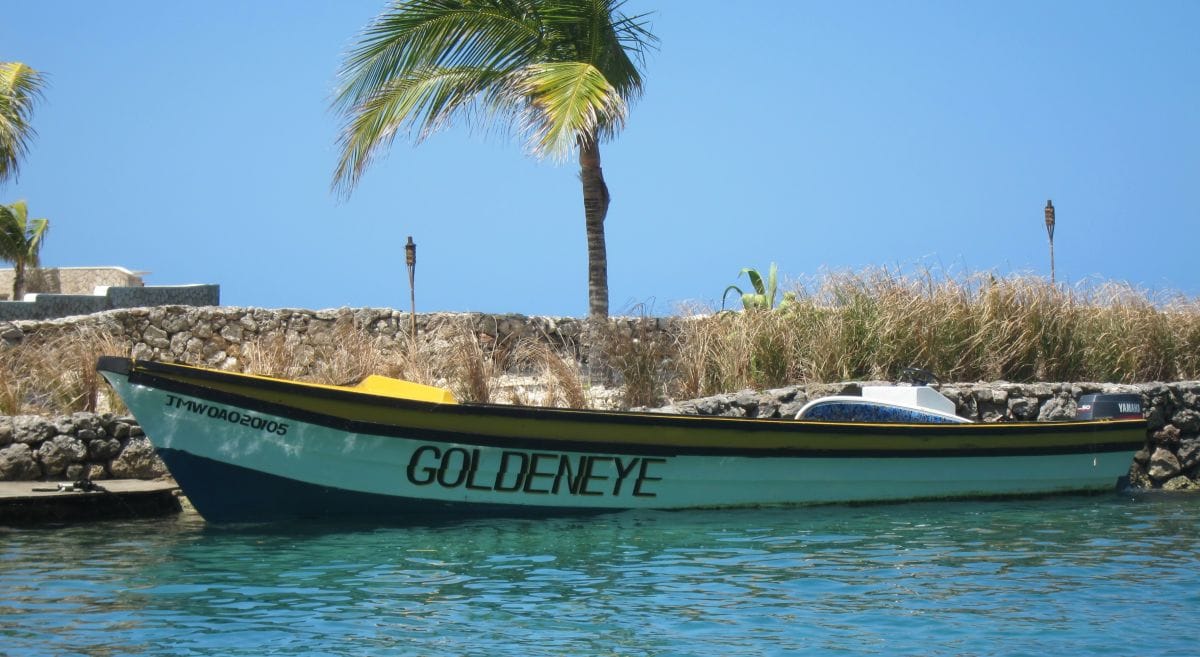 “Yes” is sole word emitted from the mouth of my exhausted, over-worked husband as he takes in the white sandy beach and turquoise waters. His body is already starting to take the slacking position that he would be in during most of our week at Goldeneye Resort. “Yay” shouts my two girls as they run directly towards our villa’s hammock which beckons them to plunge right in.  As for me, just a deep sigh after white-knuckle plane ride on a 4-seater Cessna 206 that looks like it was held together by masking tape. Our daughter playing co-pilot in the cockpit didn’t make me feel better.

Arriving at Goldeneye, located in the North coast of Jamaica in an area named Orcabessa, you have the choice of 2 1/2 hour drive from Montego Bay airport or chartering a small plane to get there in 30 minutes. We opted for the latter. Why is it that the best places are often the hardest to get to?

But I knew the minute of our arrival, that I had “done good” in choosing Goldeneye for our family vacation. This was exactly what we were looking for – a true getaway where we could chill in barefoot luxury. And chill is the operative word to stress here. It would result in the most relaxed vacation we have taken in a while. Similar to Esencia in Mexico and Blackberry Farm in Tennessee (both reviewed here), Goldeneye is one of those places that really has something magical about it – the hideaway you are dying to tell everyone about how great they are but really don’t want to for fear it will be spoiled (ahem, Tulum?) when the word gets out.

Ever since Goldeneye opened, its been on my radar given its notable background – after all this is the same spot where the all the James Bond novels were penned, and where legendary figures such as Noel Coward, Sir Laurence Olivier and Katherine Hepburn were guests of Bond creator, Ian Fleming. For those that are not familiar with the background of Goldeneye – here it is in a nutshell:

After falling in love with Jamaica during his service with the British naval intelligence service, Ian Fleming purchased 15 acres of land of what was formerly a donkey racecourse in 1946 . Mr. Fleming lived there in a villa from 1946 until his death in 1964.  Former Island Records exec  Chris Blackwell (who discovered Bob Marley), who was raised in Jamaica himself, purchased it in 1977. There it remained his private hideaway until 2010 when Mr. Blackwell expanded it to what is now an exclusive 52-acre resort.

Just based on heritage alone, Goldeneye has the cool quotient going on and as such has been a magnet for celebrities. During our stay, Kate Hudson and her entourage were holed up at the now 5-BR Fleming Villa (which we got to inspect hours before her arrival). If you walk around the groves, you will get a sense of who has graced this place before us by the plaques resting before the many different mango, lime and papaya trees planted around the property. Oh look, there’s Jude Law, Johnny Depp and Sting. (This tradition of tree planting supports the local community of Orcabessa through Goldeneye’s own foundation. Inquire if you would like to plant a tree. Just imagine, you could have a plaque next to Beyonce!).

The minute we stepped on the Goldeneye grounds, we were warmly greeted by cheerful staff. Super manager Clayton Hinds (who we just called “da man” during our stay as he was always there anticipating our needs before we even knew what they were) whisked us over the extension bridge over the lagoon that separates the hotel’s reception and spa from the villas, beach and restaurant on the other side. That bridge served more than a cross-over from reality to fantasy during our stay. It has become somewhat an unofficial rite of passage for guests to jump from the bridge in Tom Sawyer-like fashion to the calm lagoon below by the end of their stay.

And under the bridge is the hub for waterfront activities along the lagoon and sea such as paddle-boarding, kayaking, snorkeling and jet-skiing. Aptly named “Da Watersports”, the sports center is  manned by the “Triple D”  brothers (Dane, Danny and Dave), who were more than happy to take our kids off our hands and out to sea for some water play.

Goldeneye is a true hybrid of cool/chic and barefoot casual where you will find painted wood signs directing you around  the resort and walls covered with album covers. Tunes flowed all day from

Bizot Bar where breakfast and lunch are served (as you would expect from a hotel owned by the man who introduced the world to Bob Marley, you expect this place to have music – and that it does – ranging from U2 to reggae). Our afternoons comprised of hanging at either of the two pools (one salt water and one fresh), taking dips in the lagoon, or doing a special activity that Clayton set up for the kids such as carving coconuts with Ramsey the coconut man or arts and crafts with local artist Tukula on our villa deck.

Before sunset, you would most likely catch our girls playing bartender with the staff (their favorite activity by far!) back at Bizot Bar where one might also find Chris Blackwell himself playing a serious game of backgammon, all while we practiced our warrior poses at sunset yoga nearby on a cliff above the sea. That was pretty much the routine of our days at Goldeneye. It is whatever you want it to be. For us, it was about putting things on hold and moving to a much slower pace for a week.

The accommodations at Goldeneye deserve special mention: You have a choice between Beach or Lagoon Villas. Our beach villawas spacious and luxurious (but in a rustic, understated way)both inside and out. We appreciated the little touches such as the batik cotton bathrobes, the retro fridge stocked with drinks in the kitchen, and the complimentary Blackwell Rum while our kids loved the mosquito netting in their own king bed. The living area with its giant daybed became our post-dinner hangout  – where our girls enjoyed watching their first James Bond film,”Goldeneye” (they would be humming Goldfinger the rest of their stay).

The Last Word – There is no gym or kids club here. If you are a high-maintenance type of person or want a place with lots of action, please don’t come here – you won’t be happy and neither will the guests or the staff. Take it somewhere else, please.

Everything here is unplanned and laid back. Watasports (not a typo), run by Dane, Danny and Dave (the Triple D’s – two are twins), will keep you and your kids busy all day with paddle

boarding, jet skis and snorkeling in the lagoon. Ask Clayton to set you up with Ramsey the coconut man who will entertain your kids with carvings at your villa and the art ladies (there are two) who will do pretty impressive art projects with them. For my girls, their favorite activity was bartending with the staff behind the bar and getting tutored how to mix tropical drinks. Nice to know they have a fall back… Sunset yoga and pilates is offered alternatively at 5 pm daily in an open air overlooking the sea.

INVIATO UPDATE 11/13/15: Goldeneye is expanding. 26 new beach huts and 4 Lagoon Cottages are slated to open by the end of the year as well as a new restaurant and pool. We hear most of the construction of beach huts is not near the current cottages. Make sure to ask about construction and select a cottage that is away from the noise!

I loved reading your review. Can you explain the “fastpass” option you mention? I’m going in October. Thank you!