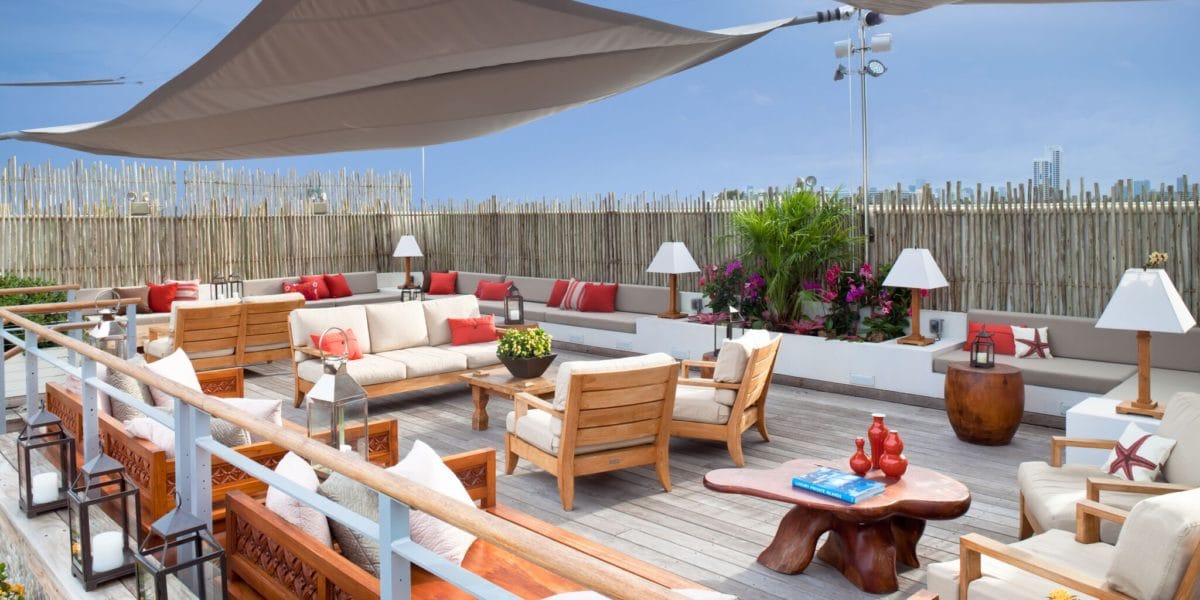 The Betsy Hotel on Ocean Drive has been a landmark for over 75 years in South Beach. Last month, after acquiring neighboring Carlton Hotel on Collins Avenue and undergoing a 2-year transformation, the family-owned and independently-operated hotel made its debut as the new The Betsy South Beach. The massive undertaking combining two hotels into one now includes 60 new guest rooms (bringing the total accommodations to 130 guest rooms), two signature restaurants, an expansive new rooftop pool complex, a new outdoor courtyard and a complete refurbishment of the interiors. Inviato contributor, Karen Larrain, reports back from her recent short stay at the iconic hotel. ‘Over this past holiday season, my travel plans included a stop in Miami Beach where I decided to give the Betsy Hotel a second try. I had first stayed in the property last summer but was disappointed as it felt a bit run down and in need of a renovation (the prior renovation was in 2009).

I was very impressed by all the improvements and surprised to find a new hotel in Miami that is promoting culture, the arts and education, instead of another omnipresent night club or bar as most other hotels in the area. The Betsy is a member of the PACE program, which stands for philanthropy, arts, culture and education. If you want a small, four-star boutique hotel in Miami Beach that is quiet and promotes culture, this is your spot.

The last time I stayed at the hotel, there was only one pool (which was not terribly inviting) on the ground floor inner courtyard and a very small, dark and cramped gym with sparse equipment. On this visit, I stayed in the new ‘Art Deco’ wing, which had large, newly finished rooms and suites with big bright, bathrooms as well as a third-floor library full of books and seating areas where guests can lounge and read. A 3,200 square foot roof deck with pool and fully outdoor spa. A writer’s room where guests can linger, write, meet or watch the news on big screens all day long. Complete with an espresso bar during the day that turns into a wine bar for evenings. The twenty-four-hour gym is much larger now and features a few of the amazing live stream spin class Peloton bikes. The Betsy is attempting to improve the community by bringing lots of art and culture into the mix. It’s impossible not to notice all of the incredible black and white rock and roll photographs that line the corridors as you walk to your room. You’ll see Mick Jagger and the Beatles amongst others. In fact, during Art Basel, the public is invited to roam through the hotel and browse all of the art as well. There is even a 1,700 square foot art gallery with a revolving list of artists. Two nights a week, you can listen to live jazz in the lobby. Jazz greats from Latin Grammy award winner Ed Calle and Roxana Amed (who won Argentia’s coveted Fierro Award for Songwriting) to Lenard Rutledge, a past “best Jazz artist’ winner in the Miami New Times have all performed here. The city of Miami is particularly excited about the hotel’s renovation as it will be the first property in Miami beach that stretches from Ocean Drive all the way back to Collins avenue simultaneously. There is even a rejuvenation underway of the alley that connects the previous wing on Ocean Avenue to the new ‘Art Deco’ wing on Collins Avenue. This is where you will find two new restaurants, LT Steak and Seafood (spinoff of the well know BLT restaurants) and Poeti, a trattoria-style Italian restaurant in addition to a “grab and go” window where guests and pedestrians can stop and purchase gelato or crepes and stroll through the alley while enjoying the poetry rail and the ORB.

The poetry rail is a railing made of several panels containing water blasted words from several world known poets and the ORB is a gigantic round sphere sculpture that surrounds the interior “bridge” that connects the two wings of the hotel. Presumably turning what was once a filthy alley filled with garbage and vagrants into a bustling alley full of life, pedestrians and public art.’