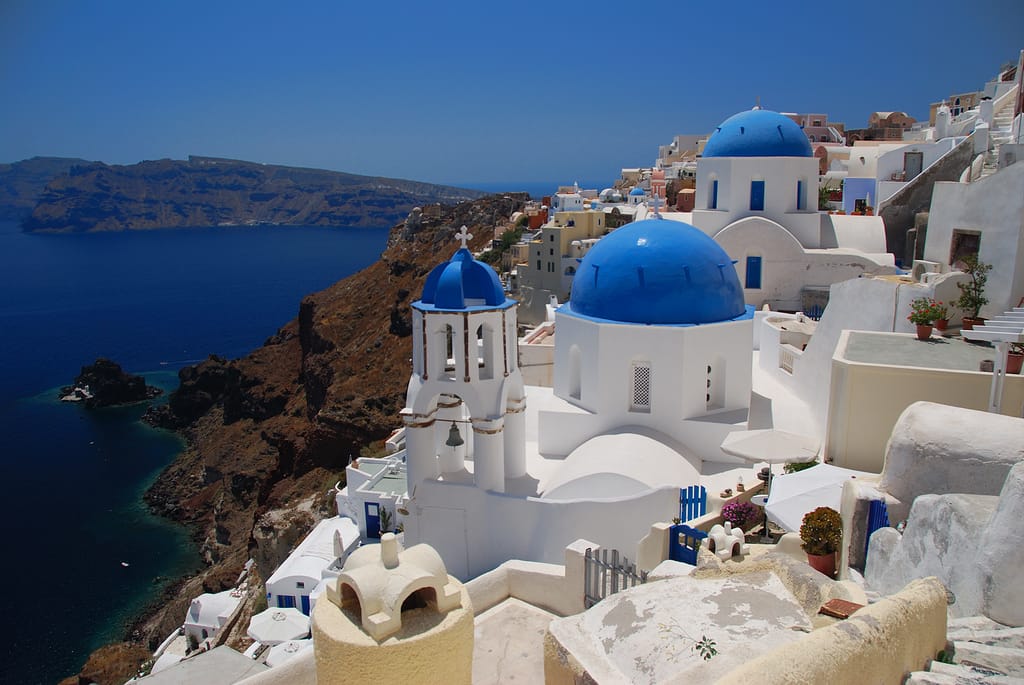 Paros, Milos, Naxos…it’s all Greek to me. I have not yet had the pleasure to visit the Greek isles so when my globe-trotting friends traveled to Mykonos and Santorini this summer, I was all over them for a review. Below is their impressions of Mykonos and their accommodations at Cavo Tagoo, an 80-room boutique hotel located cliffside with a holistic spa.

Our trip to Greece was the final leg of a longer European holiday which included Paris and Amsterdam to celebrate some alone time while our kids were settled at camp.

While we were researching our trip on TripAdvisor and American Express Platinum Travel, we stumbled upon a website Greek-Advisor. As we were dealing directly with a Greek agency, we were able to get slightly better prices than through American Express while getting a  local’s perspective on the hotels we ultimately chose. The only downside was the “fear of the unknown” factor:  What they might deem luxurious might not be match ours.

Our first impression of Mykonos as we were transported to our hotel was that it was all dry and arid landscapes  opposed to the the typical whitewash architecture with cobalt blue roofs that match the Aegean Sea that we were expecting.  A little disappointing actually. But once we settled at our hotel, Cavo Tagoo,the views significantly improved.

The common areas  of the hotel are fantastic. All boho chic and whitewashed.  The spa, gym and bathrooms are set in rock caves.

The service was impeccable. A little slow in the beginning but really kind and wanting to please.The staff at the pool were kind and exceptionally

The food at the hotel was excellent. The breakfast, which was included in the price of our room, was hands-down one of the best we ever had.  A cornucopia of everything homemade and delicious. You could subsist on their breakfast alone. The lunch/ poolside menu was delicious as was the sushi on the dinner menu.

The Cool vibe at the pool overlooking a breathtaking sea. Very chic set up. Perfect for cocktails watching the sun set.

What We Didn’t Love

The rooms were subpar at best – I would say they were 3.5 star rooms with the common areas of the hotel a  5 star. My husband equated it to staying at the “Shore Club on the Aegean”. (Note: 33 of the 80 rooms, suites and villas have private pools).

The pool, albeit cool and chic and beautiful, literally ends from an infinity vantage point over the main road that links all cars to the main town. Hence, cars are driving by constantly. Not sure I appreciated traveling ten plus hours to Greece to see this. However, you don’t really hear anything and once acclimated, we didn’t notice it that much.

Mykonos itself is a quaint cobblestoned maze of a town brimming with great restaurants and shops and nightlife. Having said that, I was a little discouraged to see a Louis Vuitton store at the top of town.

The beaches are very nice but not breathtaking. It’s all about the beach clubs, namely Soleymar and Nammos. The former is more calm and relaxed then the latter.

Nammos, an exclusive beach club located on Psarou Beach, has a St. Tropez/Ibiza vibe. Afternoon lunches can be very debaucherous. Tons of fun if your with another couple or more … which we were.

Don’t Miss
Tip
Skip
There’s nothing really to skip per se. It’s just a question of whether you need to go so far away for an experience you can have a little closer to home. I would go back to the island again only it were with a large group of friends. We did not partake in the late-night clubbing so famous on Mykonos although we never got home before 2:00am from dinner.
The Last Word
We spent one day at our friend’s villa that they had rented for month of July. It was a spectacular villa booked through Aqua Living. If I were to return to Mykonos I would do it villa style over a hotel any day with a group of people.

It’s the only way to go.