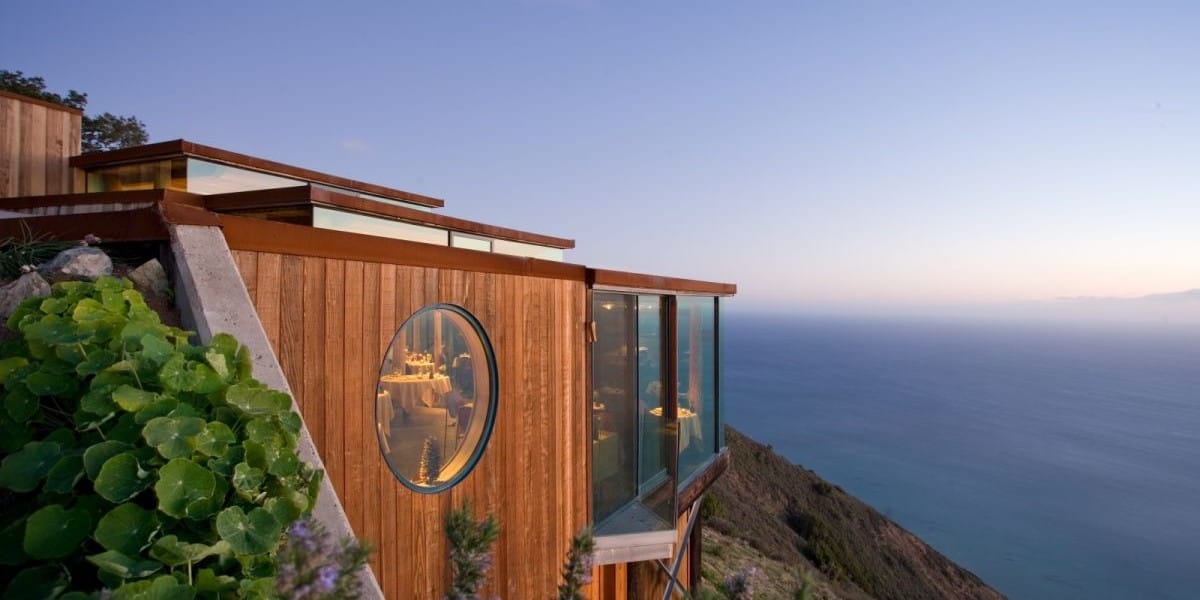 Conde Nast Traveller had it on its list as “one of the places you must stay before you die“.  Travel & Leisure ranked it among the top hotels in world in 2010. Johansens named it 2010’s most romantic hideaway. It is consistently ranked #1 among  Andrew Harper’s readers favorite U.S. hideaways. The awards and accolades are endless. It is on almost everyone’s wish list of places to go and a favorite of anyone who has been there.  It also happens to be très eco-chic.

Of course, you know I am talking about the Post Ranch Inn as the name appears blatantly in the title and even if it didn’t, the picture above could have certainly given it away.  This 40-room private and romantic retreat, whose property has been owned by

the Post family since the 1800’s, sits on 98 acres on top of a cliff 1,200 feet over the Pacific Ocean.  Over the top service, incredible vistas and unique, luxurious accommodations (Butterfly, Cliff Mountain, Coast, Treehouse etc. – each room has its own distinct character and design. Take your pick if you are lucky to have the opportunity – the inn is often sold out a year in advance) keep guests coming back year after year.

So much has been written about the Post Ranch Inn, I’m not going to spend time on rehashing all the special features and attributes of this property except to praise some of their green initiatives (it is Earth Day today after all!)

The Post Ranch Inn is considered one of the leading green coastal properties by many due to their efforts to protect the environment and reduce carbon footprint. On the property, all large old-growth trees are preserved and protected. The property is also home to several rare, endangered species such as the condor, Smith’s blue butterfly and red-legged frog. If you have been a guest here, you may have seen them or other animals that frequent the property such as coyotes, bobcats and wild turkeys.

The organic architecture of the hotel was constructed with the environment in mind, using natural materials of glass, wood and stone.

According to the GM, Dan Priano,  in a recent interview “Every environmental aspect was carefully considered; the earth-sheltered guesthouses capture passive heating and cooling, and the stilted tree houses protect the fragile root balls of the ancient redwood.

What is most impressive to me , however, are the solar panels. In 2009, Post Ranch Inn installed one of the largest hotel solar systems (a 990-panel installation to be exact) in the U.S., to help offset approximately 70% of its’ electrical needs.  The system, owned and operated by Recurrent Energy, one of the largest providers of onsite solar power, is estimated to reduce carbon emissions by 611,000 pounds annually – the equivalent of removing over 50 vehiciles from the road!

Hotel guests can get real-time updates on how much power is being generated at any one time through a monitoring station in the hotel ‘s library but you can also see this online right here on a special area of their website – VERY COOL.

Have you been to the Post Ranch Inn? Please send a comment and let us know what you thought!