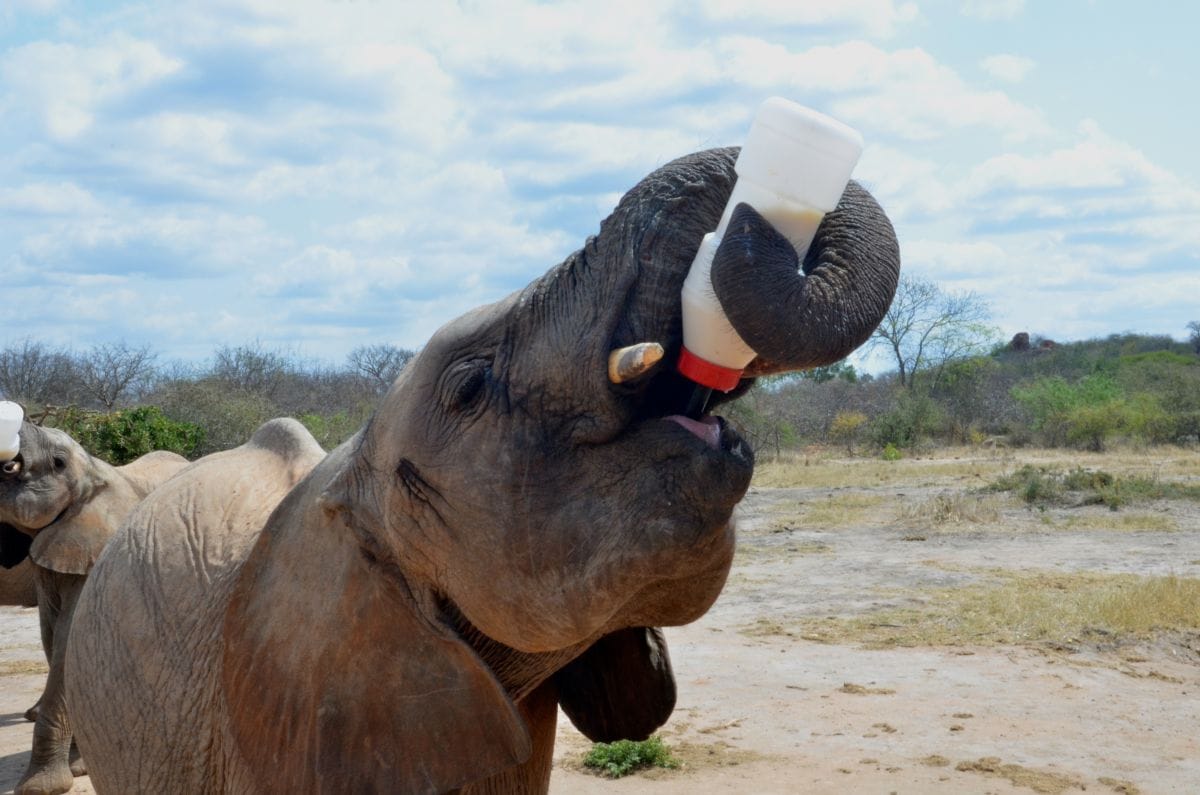 Let me say, right off the bat, if you have any affinity for elephants whatsoever, Ithumba needs to be on your bucket list. It really is the only place I know where you can interact with elephants completely in the wild. There is nothing quite like it.

Wild ones at the drinking well

Nick and Kevin surrounded front and back…

Getting a hug from Wendi

During our stay at Giraffe Manor, we spent a day hanging out with the elephant residents at the The David Sheldrick Wildlife Trust, a very special elephant orphanage in Nairobi that is home to a current 26 baby elephants (ranging from one week to 8 months) that are mostly victims of poaching.  Once the elephants are a little older, they are ready to be transferred to one of the two relocation centers in Kenya to ease their transition back to the wild.  It’s a big milestone – kind of like when your child graduates from nursery school to Kindergarten.

We were fortunate to spend our next two days at one of these locations: Ithumba Camp in Tsavo East National Park – about a 60 minute flight from Nairobi. Getting to Ithumba involved a charter Cessna single engine plane with a single pilot (emphasis on “single” my husband would like to point out – as in no co-pilot).

When my husband learned only one pilot would be flying the 6-seater plane, all hell broke out.

Did Boskies (the charter) know, my husband asked, that in the U.S.  two pilots were required on private charters (you know, in case the pilot croaks while flying the plane)?? That’s interesting, the amused faces of those at the desk seemed to suggest. But  this is Kenya, where pretty much anyone, even your pet, has a flying license.  A husband-wife dispute on life insurance policies and who gets the kids in event of a crash ensued.  And then the final act:  an interrogation of the pilot (who runs the charter, mind you):  “When was your last physical?”  “How many packs of those cigarettes in your pocket do you smoke a day”. Satisfied somewhat with the pilot’s response, we got on the plane to an eventless and scenic ride. Of course, for the remaining charters of our trip, another pilot was added at my husband’s request – you know, just in case.

Ithumba is an intimate self-serve tented camp that is owned by the David Sheldrick Wildlife Trust and primarily reserved for its donors.   Due to its small size (four tents) and proximity to elephants (both orphans and wild ones), Ithumba gets booked up really fast – often a year in advance.  As a self-serve camp, most people book the whole camp as group with a guide and a cook and their own food supplies. More seasoned campers just come on their own.

All the tents connect to open air bathrooms and within a few 100 feet of a large  pavilion, attached to a  spacious kitchen, where you dine and chill when you are not in the bush.  To say the camp is remote would be an understatement. There is literally only one boulder in the whole area that you must climb and stick your arm out in order to get cell reception. It  is also the only camp in the area. For our two nights, it was just my husband and I, our guide and a chef. I have to say the most delicious meals during our entire trip were here.

During the evenings, we really had an opportunity to decompress and enjoy the solitude at night, listening to stories of the bush (and near death experiences) by our wonderful guides, Lionel and Nick. We are appreciative that he waited to tell us about the scorpions and snakes that can hang around camp until the day we left. Ignorance is bliss!

On our arrival at Ithumba, we went immediately to the mud baths to meet the orphans and ex-orphans (that is, those orphans that

do not require milk any more – usually at 8 years old – as such, they do not need to return to the stockades at night for protection).

I can’t quite describe the experience of going from emptiness and complete silence in one minute to the sounds of trumpeting the next with a herd of elephants rapidly coming straight towards you, ravenous for their morning milk feeding.

And then there are the mud baths. Its like watching kids go crazy in a sandbox – just EXTREMELY large kids.

The only word I can think of watching this scenario unfold before our eyes is incredible.

Our three days at Ithumba was nothing short of amazing – literally just observing the older orphans and their wild elephant companions, feeding them milk, playing with their babies, and physically getting pushed around. That is what you come here for.

Being surrounded by these gentle giants for even a short time, you can get quite attached to them – each with their own unique personalities.

I adored Mulika, a sweet 12 year old female who came to the Trust at seven months old, a victim of poaching. By her (and the others as they took turns babysitting) side at all times was her little baby, feisty Mwende – just under a year old – the first wild baby born from an orphan in Ithumba.

But the one I became most attached to was Wendi, who was found only days old still with her umbilical cord intact, alone in a forest. Never having known her elephant mother and family, and having been raised by humans, she is very fond of humans. Now 10 and living in the wild, she is very much the Matriarch of the Ithumba orphans.

She is mischievous, curious, funny and affectionate.

She is one of the most endearing beings – human or elephant –  I have ever met.

Loved your story part 2. Just an amazing experience. It came to an end too soon.

Keep talking about your husband…it was hysterically funny!

Loved reading this!! Thank you so much for sharing. I treasure my 3 days in Ithumba and look forward to going back. Seeing this “second step” for these orphaned elephants (from the david Sheldrick Wildlife Trust) is an experience I will never forget. Love the photos!