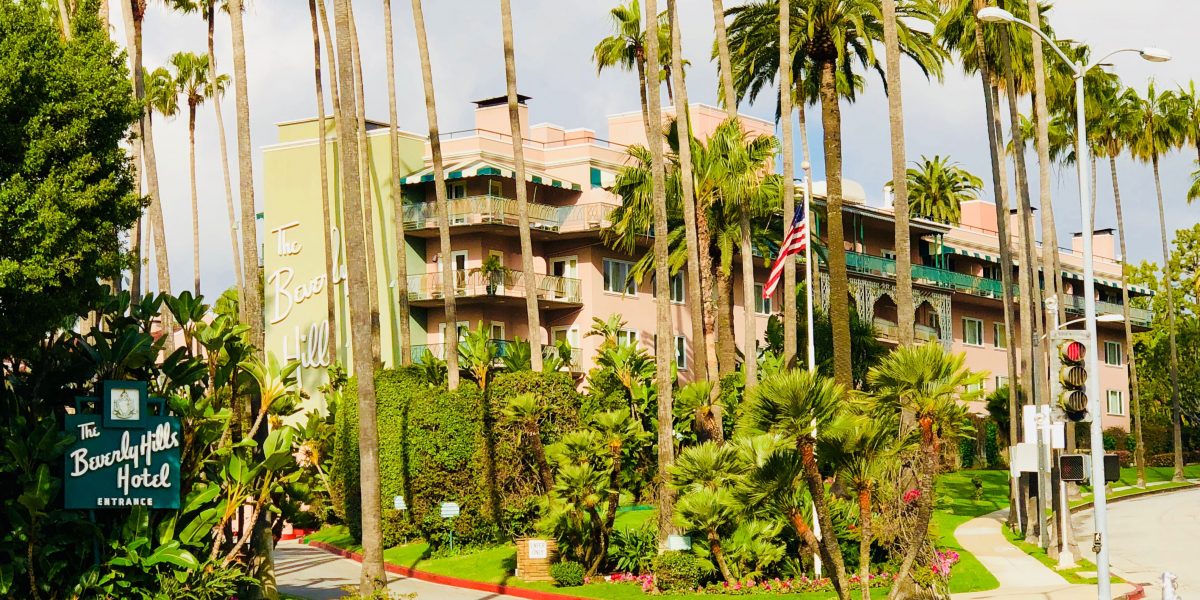 Back to the Beverly Hills Hotel

After spending the first half of our Spring Break in Utah, where I spent more time than I would like in an emergency room, it was time to shed our winter gear and wintry backdrop for flowy dresses, palm trees, and SoCal vibes. A short flight and we were in tony Beverly Hills, our home away from home for the next four nights. Without a doubt, there are plenty of exceptional hotels to choose from in the 90210 zip code, among them the Peninsula, Montage, the Bel Air, and the recently opened Waldorf Astoria. But we all unanimously wanted to return to the Beverly Hills Hotel, where our family last stayed five years ago.

It was during that stay, when the Beverly Hills Hotel was celebrating its 100th anniversary (the hotel opened in 1912 before there was even a city called Beverly Hills), that we fell head over heels with the iconic hotel, otherwise known as the Pink Palace (see the original Beverly Hills Hotel review on Inviato). The day after we departed, major renovations would begin to freshen up the hotel with an update to the guest rooms and public spaces. While I saw a preview of what was to come through sketches and designs, I was worried the design team would abandon some of the iconic design elements that the hotel is so famous for (Can anyone imagine the Beverly Hills Hotel without the banana leaf wallpaper and pink and green motif?). After all, we all have seen some hotel renovations go awry. In desperate efforts to modernize and keep up with the competition, some hotels lose the uniqueness that appealed to guests in the first place. In any event, I was eager to return and see first-hand the new and improved Beverly Hills Hotel.

For me, the difference between a good and great hotel starts with the hotel’s interaction with guests before they even arrive. The Concierge team sets the tone. In this regard, I was very impressed with Paola and Randy at the desk, who not only responded promptly to my many email reservation requests but also provided excellent suggestions for us  and found a tennis pro to hit with my husband on UCLA’s tennis courts. Throughout my stay, the concierge team and the staff at BHH was quite impressionable.

We arrived from LAX in a cramped taxi due to poor planning on my part, not the way you first want to make an entrance here where limos, Bentleys, and Teslas reign supreme. As we approached the hotel, my younger daughter now 11 years old, had the same delighted expression as she did five years ago when she first peeked out the car window up at the hotel amidst the palm trees.  ‘Ooh, it’s pink!’

Some things never get old.

Thankfully, the much-photographed entrance with its red carpet and bellman were exactly as I recalled. A step and repeat backdrop is now on one side of the red carpet for those who want to pose for the invisible paparazzi. On the other side of the carpet, lush foliage makes for even a more popular backdrop for pictures: we watched one girl step back and fall backward straight into the bushes!  A frequent hazard of selfies these days, so watch your step.

I breathed a sigh of relief at the first sight of the renovated lobby. Tastefully decorated, not too modern but more contemporary than before, and still paying homage to its history with the elegance and glamour that the Beverly Hills Hotel has long been known for. The floral bouquets displayed throughout the hotel were stunning. The concierge and check-in desk to our right has a little more swag. Everything was in its rightful place but stylistically just nicer. Our check-in was swift. My girls, now older and eager to be treated as adults (when in their best interest), still cherished getting their VIP card, which provides young guests unlimited complimentary free sodas and juices on the property (they come in handy at the Fountain Coffee Room and pool!). They both saved them – you never know when your BHH VIP Card may come in handy again.

While I would have loved to experience one of the famed Bungalows spread out along the winding pathways on the lush 12-acre property, we were supremely happy in our spacious inter-connecting Deluxe Guestrooms on the 3rd floor. The rooms were very spacious, bright, luxurious and comfortable in a ‘California-chic meets 1940’s glamour’ style with walk-in closets, enormous bathrooms and oversized windows overlooking the grounds. The King beds were tucked in an alcove, making them feel more like Junior Suites.

The jar of gummi bears, fresh popcorn (which we sneaked into our room), and cookies placed in the girls room was a winning combination. BHH certainly knows how to win the little ones over. We needed for nothing and everyone was completely content. Not that easy to say for our tribe.

Out and About in Hollywood

Over the next few days, we enjoyed our time walking around West Hollywood, Brentwood and Beverly Hills (along with a detour to Universal Studios and walk through the UCLA campus), shopping and eating at hip places where we would inevitably bump into other Manhattanites with the same idea. We took advantage of the complimentary hotel Mercedes at BHH to drop us off at restaurants in the evening, which we were pleasantly surprised was available more often than not.

People watching is probably as ‘good as it gets’ at the Beverly Hills Hotel. Particularly so as we were there during the Stormy Daniels 60 Minutes interview and the hotel was front and center as the scene of the crime. Ironically, we eyed two 2016 Republican Presidential candidates John Kasich and Ted Cruz here one day apart making their way to lunch at the Polo Lounge. There are an array of sorts staying or visiting the hotel. In the course of three days, I saw an older gentleman in full cowboy getup (I even got a ‘howdy ma’am and a tip of the cowboy hat), plenty of stylists rolling makeup bags down hallways, Kardashian wannabes (I will never understand this phenomenon) and fellow NYers. I could sit in the lobby all day and never be bored by the parade that goes by.

As for the restaurants, we made sure we had time to revisit the Polo Lounge still very much the place for the L.A. ‘see and be seen’ power lunch since it opened in the 1940s, and the Fountain Coffee Room, a 19-stool diner style coffee shop that has been in operation since 1949.

We had breakfast in the Fountain Coffee Room twice during our stay. Interestingly, both times at least one guest was sitting at the counter in their PJs and bathrobe. The food is nothing to write home about (with the exception of the silver dollar pancakes), prepare for a wait even after you have a seat, and yes, it is totally overpriced (why the VIP cards come in handy). But still, we loved eating at this old-school iconic diner. It’s just a cool thing to do.

We had Sunday Brunch at the Polo Lounge which is best if you can sit outdoors on a nice day and listen to the live jazz band. Still, my favorite spot for brunch or lunch is the poolside Cabana Café which serves everything from burgers to wood-fired pizzas and salads. Plus, you get prime people watching at the pool. My husband and I had grandiose ideas having a nightcap at Bar Nineteen 12 (named in honor of the year the Beverly Hills first opened) but we were just too wiped out.

Our favorite part of our L.A. trip was relaxing at or around the hotel: doing a morning jog with my daughter on and around posh Rodeo Drive, picking out our favorite houses and playing the ‘if you could pick one house to buy’ game and imagining who lived behind the iron gates back then (Mary Pickford, Charlie Chaplin, and Rudolph Valentino are some former famed residents) and now. Or lounging in a chaise at the pool, reading the Sunday New York Times (but looking up from time to time to check out the scene) with a Bloody Mary in hand and soaking in the Vitamin D rays.

Before the crowd comes

There is no other place that I can think of quite like the iconic Beverly Hills Hotel with its legendary old-world glamour and history. I mean c’mon these are hallowed grounds where the likes of Marlene Dietrich, Marilyn Monroe, Frank Sinatra, Fred Astaire and Laurence Olivier once roamed! There is so much to love here:  the celebrity-favorite Polo Bar, the nostalgic Fountain Coffee Room diner, the incredible pool and stylish cabanas, the people watching galore, the exceptional service, and the luxurious rooms and bungalows. Time and again, this hotel leaves me in awe. Note to the Beverly Hills Hotel: Do all the updates you need, but don’t change.  I can’t wait to go back.

There are 208 Rooms and Suites at the BHH including 21 ‘one of a kind’ one to four bedroom bungalows on the 12-acre property. All of the Beverly Hills Hotel guestrooms and suites in the hotel were recently renovated and include new furnishings and technology.

Likewise, most of the Bungalows located on the 12-acre lush grounds are newly restored by Champalimaud (the Interior Design firm who also renovated the Bel Air and countless other luxury hotels) with a ‘modern California’ style. The coveted Presidential Bungalows opened in 2011. If you can, splurge for one of the five ‘one-of-a-kind’ bungalows inspired by the hotel’s legendary guests such as Elizabeth Taylor (who actually did spend six of her eight honeymoons here), Lauren Bacall and Marlene Dietrich. These 5,000 square foot, 3-bedroom bungalows come equipped with a great room, chefs kitchen, outdoor living area and fireplace and infinity plunge pool. The term ‘bungalow’ is a bit of an oxymoron here.

Some famous ones to check out if you can: #7 (named Norma Jean) was Marilyn Monroe’s favorite Beverly Hills Hotel bungalow, #4 is where Howard Hughes lived on and off for 30 years, and #5 is where Elizabeth Taylor and Richard Burton often stayed.

These are just a few of our favorites in town that we hit this trip.  (See Inviato’s review of the Malibu Beach Inn for Malibu favorites). Stay tuned for our upcoming City Guides on Los Angeles and Malibu for a more in-depth lists.

Our most successful power shopping was in Melrose Place, Brentwood and Robertson. A few of our favorite stops: